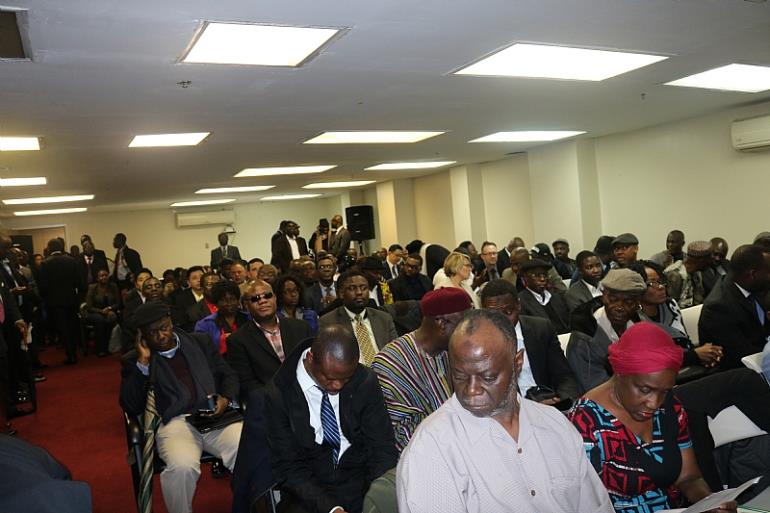 Ghana’s Finance Minister, Mr. Ken Ofori Atta has told Ghanaian Diaspora that the Akufo Addo led government is focused on having an institutional mechanism to tap their capital and knowledge for the accelerated development of the country.

To this end, he said that a special Diaspora conference will be held in Accra, from July 5 to 8, this year as part of the needed effective engagement with them.

The Minister was briefing a cross section of Ghanaian professionals and investors at the offices of the Permanent Mission of Ghana to the United Nations in Manhattan, New York on the government’s transformational economic agenda for addressing Ghana’s debt, attracting investments and creating jobs.

The well attended three and half hours forum afforded the Minister, supported by the Deputy Minister for Finance, Mr. Charles Adu Boahen, Dr. Mohammed Amin Adams, Deputy Minister for Energy and Mr. Yofi Grant, Chief Executive of the Ghana Investments Promotion Centre the opportunity to answer various questions agitating their minds on: diaspora engagement, economy, corruption, lethargic conduct of some civil and public servants, the energy situation, revitalizing the stock exchange and the road map to the one district one factory initiative.

Mr. Ofori Atta and his team were part of a high powered government delegation led by Vice President Muhamadu Bawumia that had just completed talks with the World Bank and International Monetary Fund in Washington DC. The team took part in the Non-Deal Roadshow meetings with Ghana’s bond holders, potential investors, US Government officials and other key stakeholders.

Outlining some measures taken to ensure financial discipline, Mr. Ofori Atta mentioned that the Public Finance Act was being enforced with appropriate sanctions for defaulters; a Risk Management Unit had been set up with mechanisms to track where every cedi is going. With the aim of creating the most business friendly society, he said that the plethora of taxes had been removed to enhance production, adding that “we are re-calibrating for external finances”, and we were able to save 4.5 billion cedis in this year’s budget.

For example, he said that following a recently conducted biometric data registration, 50,000 people on the government payroll did not show up. Government was also giving each constituency $1 million for development, aside the one district one factory policy to create jobs that will prevent the rural urban drift.

Additionally, the Minister revealed that Ghana was no more borrowing to support its international payments that often led to debts, but had rather rescheduled all payments for a longer term.

In this vein, he said that the Government’s Economic Management Team headed by Vice President Bawumia is working very hard to ensure that there is macro-stability, fiscal discipline and reduced inflation that will create a more positive primary balance.

On energy, Mr. Ofori Atta disclosed that government is going to privatize or lease some portions. To buttress this argument, he said the Electricity Corporation of Ghana which records 35 per cent power loses but manages to collect only half of what it generates will have an infusion of private sector participation.

Mr. Yofi Grant said the government had “audacious goals” that will make Ghana the best place to do business in Africa, pointing out that the country is being re-positioned to a position of pride, as the “economic arrow head of Africa”.

In his words, Ghana can generate even more than $5 billion annual contribution from the diaspora with the right engagements.

Urging them to adopt the can-do spirit, Mr. Grant outlined plans to make it very easy to do business in Ghana, for example enabling those abroad to register their businesses from their respective locations instead of travelling all the way to Ghana to do so.

At his turn, Mr. Adu Boahen said the government was doing everything to create an enabling environment for their businesses to thrive.

Dr. Amin Adams said that the government had audited all the existing power agreements by the previous government and realized that Ghana does not need all of them. To this end, four will be allowed this year, another four will be differed for next year, six will be rescheduled for 2030 and the remaining 25 cancelled.

Answering a question on renewable energy, Dr. Amin Adams said that everything will be done through competitive process to eliminate corruption.

He asked those interested in the process to start their preparations to take part.

Ambassador Martha Pobee, Ghana’s Permanent Representative to the UN praised the Diaspora for their wonderful contribution to the Ghanaian economy and urged them to continue to give of their best for the country. The Mission, she said regarded them as part of Project Ghana and therefore the event was a continuation of the positive engagement and collaboration, they have always enjoyed.

She hoped that the forum will provide answers to the many questions they have and facilitate dialogue and exchange of ideas.

The Moderator for the programme, Dr. Kofi Boateng announced the formation of a Ghanaian Chamber of Business in the USA to give mutual support to Ghanaians living abroad and at home. He indicated that the business community in the USA was poised to do business in Ghana.

He expressed support for a suit filed by the Progressive Alliance Movement for the Electoral Commission in Ghana to implement the Representation of the People’s Amendment Act passed in 2006, to enable Ghanaians abroad to vote in local elections.

As part of the programme, Mr. Kwasi Twum Ampofo, a Ghanaian Information Technologist based in New York presented a sample of the smartphone he designed in the United States to the Finance Minister.