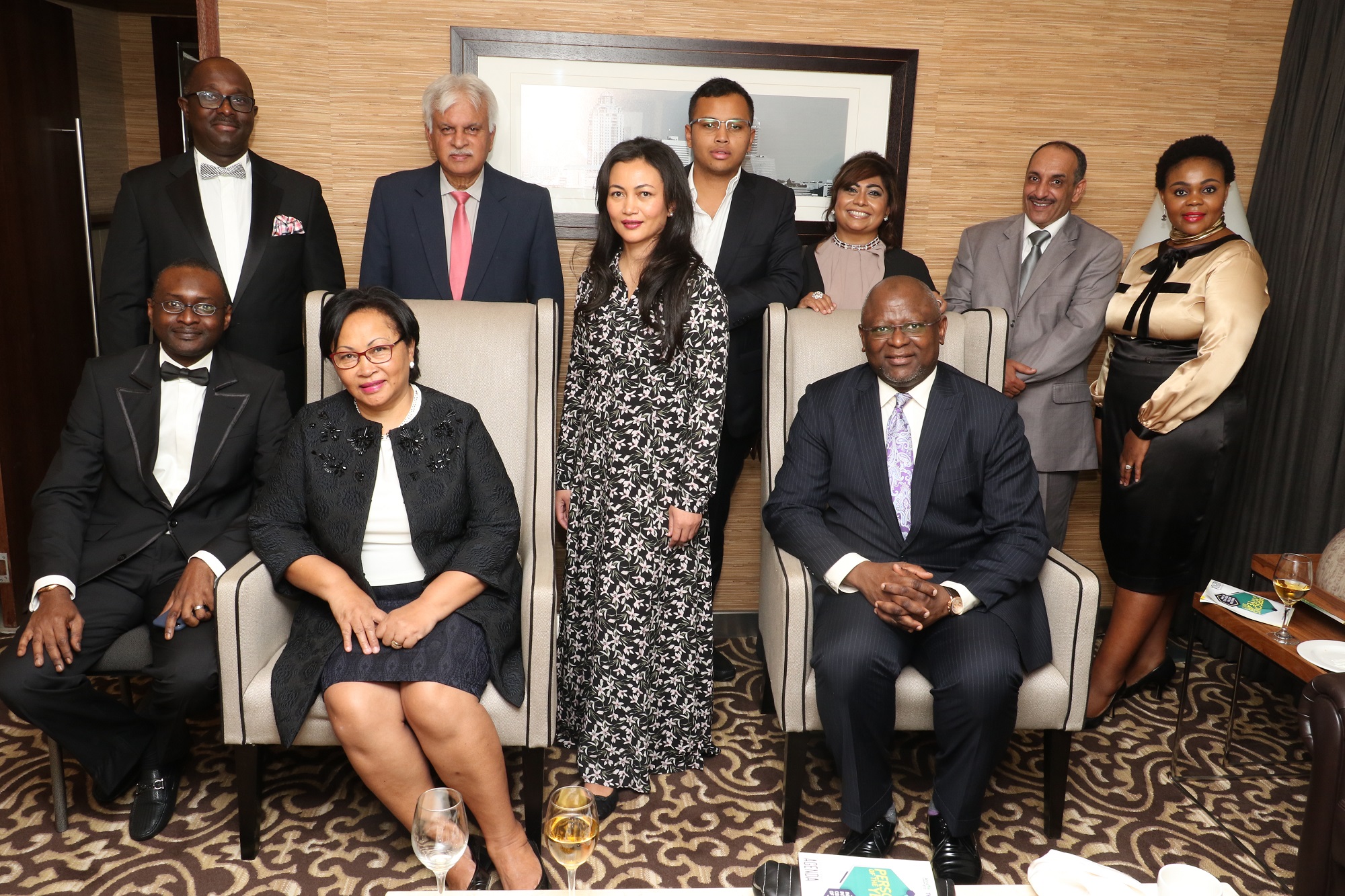 PortsmouthUnited Kingdom
February 26, 2018
As part of its efforts towards promoting entrepreneurship and development in Africa, the African Leadership Magazine U.K. recently held her annual African Leadership Magazine Persons of the Year Award. The award which is in its 6th-run was also used to unveil inductees into the inaugural African CEOs Hall of fame.
The two-day event, which held between 23rd and 24th, February 2018 was a gathering of some of Africa’s finest, business and political leaders.  The dinner was preceded by a pre-event breakfast business meeting, with a panel discussion on the theme: Africa Beyond 2020: Sustaining Africa’s fastest-growing economies.
The dinner which held at the Sandton Convention Centre Johannesburg, South Africa, with the theme: “Driving African Growth Through Private Sector Mobilization,” had in attendance, Her Excellency, Mrs. Lalao Ravalomanana, Mayor of Antananarivo and wife of the former president of Madagascar, who represented His Excellency Mr. Marc Ravalomanana, former president of Madagascar;  Dr. Manu Chandaria, Chairman Comcraft Group, Kenya; Dr.Adesola Kazeem Adeduntan MD/CEO, First Bank Nigeria MD/CEO First Bank, Nigeria; amongst other African business leaders.
In his welcome speech, the Chairman of the Advisory Board of the African Leadership Magazine, North America, Ambassador Joe Beasley, maintained that, ” This year’s event is remarkable in many ways; but, more importantly, this event happens to be holding about 200 meters from the Nelson Mandela square, and about five months to his posthumous 100th birthday.  Expectedly, the South African government have lined series of activities to celebrate the great Madiba in July.” Continuing, he said, “Nelson Mandela means so many things to so many people, but above all, he is a symbol of leadership.   And, as we gather here today, we must self-examine, and also ask the tough questions, that may only be answered by actions – how would the world remember us? how would posterity judge us?”
While congratulating the honorees, he mentioned that the Persons of the Year Award was conceived in 2010 in keeping with African Leadership Magazine’s  tradition of presenting the sides of the continent, which hardly finds placement at the global stage, and celebrating exemplary leadership and individuals who have contributed to shaping the global perception of the African continent.
He also reiterated the magazine’s firm believe in the continent, ” We are believers. We are gathered here today, to send a simple message, “Africans can solve Africa’s problems.” We must, therefore, chose to see possibilities, where others see difficulties; a continent of limitless opportunities, where others see threats.”
The Persons of the year dinner, as well as the pre-event business breakfast is been described as a strategic attempt in recent times to confront the the twin problems of unemployment and poor Intra-Africa trade, as the event brought together business and political leaders from over 23 countries from the East, West, South, North and Central Africa. Participants at the event made commitments to redouble their efforts towards job and wealth creation.
In his remark, the President of Madagascar, highlighted his desire to see the entrenchment of Democracy in his country, as well as his efforts towards improving the living conditions of his people, as he looks to contest the coming elections.
The inaugural event saw the induction of CEOs of 25 leading brands on the continent. Also, The African Leadership Magazine Persons of the Year saw  outstanding Africans clinch coveted prizes in seven categories;
Some of the Awards recipients include His Excellency, Marc Ravalomanana, former President of Madagascar; Dr Manu Chandaria, Chairman, Comcraft Group, Kenya; Ms Suzan Mashibe, Executive Director, Tanjet Aviation. Tanzania; Mr. Godfrey Itaye, Director General, Malawi Communications Regulatory Authority; Dr Adesola Kazeem Adeduntan MD/CEO, First Bank Nigeria PLC; Mr. Frank Adu, MD/CEO, CAL Bank Ghana; Mr. Abdalla Abdulkhalik, Managing Director, Gulf African Bank, Kenya; Mr. Corneille Karekezi, CEO African Re-Insurance; Mr. Sanjit Chowdhry, Chief Executive Officer, Banyan Tree Bank Limited, Mauritius;     Mr. Mesmin Kabath, CEO Keco Group, Congo Brazzaville; amongst other leading business leaders.
About African Leadership Magazine:
The African Leadership magazine is published by African Leadership (UK) Limited, a company registered in the United Kingdom (Company No. 07435198). The magazine focuses on bringing the best of Africa to a global audience, telling the African story from an African perspective; while evolving solutions to peculiar challenges being faced by the continent today.
Since its maiden edition, African Leadership Magazine has grown to become a leading pan-African flagship leadership-focused publication read by over 1, 000, 000 targeted international investors, business executives, government policy makers and multilateral agencies across Africa, the Middle East and Asia, Europe and the US. It is distributed at major international and African Leadership events around the world. The magazine has over 850,000 subscribers/Followers on facebook and a virile readership on other social media platforms. It is a niche and unbiased African voice born out of a desire to ameliorate the lot of Africans by focusing on individuals and corporate bodies that are known for their legacy-based approach to leadership. We believe in building sustainable leadership in Africa through exchange of ideas in tandem with global best practices. The magazine shall continually seek to herald the dawn of a new Africa as the continent of promise and global leadership, championed by people of integrity and resilience who are rising from the challenges of an unpleasant past; thereby preserving a legacy for future generations of our people.
Media enquiries:
Contact Kingsley on:  Kingsley@www.africanleadershipmagazine.co.uk