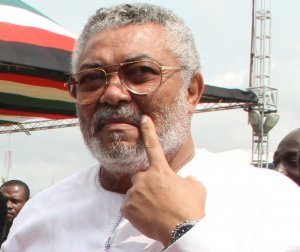 Ghana’s former President, Flt Lt Jerry John Rawlings has in a meeting with the new American Ambassador to Ghana, Robert Porter Jackson, called on all stakeholders in the forthcoming Presidential and Parliamentary elections to ensure the highest levels of transparency to guarantee a peaceful process.
It appears people have reached a saturation point, nevertheless what is important is for all stakeholders to ensure the highest level of vigilance is maintained to guarantee peaceful elections, the former President said.
Flt Lt Rawlings also called for the United States¹ support in ensuring an impartial and credible electoral process during the courtesy call by Ambassador Porter Jackson last Wednesday.
On Africa, former President Rawlings asked the United States and other nations to help check the spread of extremist tendencies. He intimated that there was the need to do justice to the Tuareg people in Mali, stating that, it is imperative and important that the rights of the Tuaregs are also recognized if we want to contain throat-slitting extremist groups from gravitating towards our sub-region.
On the unstable situation in Libya, he said the people should be allowed to elect their leaders through a democratic process without due influence or imposition of puppet regimes by the West.
Flt. Lt. Rawlings, who is a former African Union High Representative for Somalia, also called on the United States to help avert famine in Somalia as millions of men, women and children are at risk of starvation due to drought.
At the global level, he welcomed the United States¹ renewed relationships with Cuba and Iran and commended the Obama administration for staying the course in spite of strong opposition to the thawing of relations with Tehran.
Men and women of conscience will be gratified about the new relationship between the United States and Cuba and most especially that it is happening in the lifetime of Fidel Castro.
He added that: Men and women of conscience will also be gratified about the new relationship between the US and Iran and I am glad the US has stayed the course in spite of the opposition that she was encountering.
After all Iran is the country that suffered the loss of over 200 men, women and children who were blown out of the sky in international airspace; it is also Iran whose citizens and soldiers were killed by chemical weapons attacks.
Flt Lt Rawlings also called on the United States to bring its influence to bear on the Yemeni issue because the media was not giving much attention to the plight of the starving and thirsty victims of the war. He called on the United States to use its influence to address the humanitarian situation to allow medical supplies, water and food to the deprived.
People are being starved of food, medical aid and water, yet we don¹t hear reports of war crimes allegations made against those responsible. And yet we are hollering and ranting and raving about the same issues in Syria, the former President said.
President Rawlings and Ambassador Porter Jackson also discussed the transfer of two Guantanamo Bay detainees to Ghana and the political situation in Nigeria.
Ambassador Porter Jackson said he was happy to be in Ghana and cited Trade, Health, Education, Peace, building strong institutions and good governance as his priority areas.
Present at the meeting were Fred Odisho of the American Embassy, Nana Fredua Agyeman Manu an Entrepreneur and Investment Banker, Dr. Anthony Dzegede, Agricultural Engineer and NDC Parliamentary candidate for Klottey Korle, Dr. Zanetor Agyeman-Rawlings.