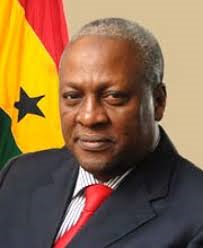 President of Ghana John Dramani Mahama, has recently said the country is gradually changing the educational system from grammar based type of education that was handed to Ghana by the colonial masters to technical and vocational education, which is the appropriate education relevant for the development of the nation.
According to President Mahama, who was speaking at the 25th anniversary celebration of the Akatsi Senior High Technical School over the weekend, for a nation to develop rapidly it must focus attention on technical and vocational education instead of marketing courses, which is unfortunately dominating the educational system now.
He called for change in the attitude of those who always think that technical students were those who performed poorly and did not qualify to attend secondary schools, noting that it was important for parents to encourage their wards to embrace technical and vocational education, which he said had the potential of creating more jobs for the youth and capable of reducing poverty.
Mahama also assured the gathering that the government would continue to promote vocational and technical education because the country lacked the needed expertise in the areas of technical skills that would produce engineers and technicians to feed industry. According to him, lack of graduates in these technical fields continues to affect the development efforts of the country.
The president promised to create educational opportunities as a way of reducing poverty through quality education. He commended former President Jerry John Rawlings for the introduction of community based secondary schools, adding that the current government initiative of building community Senior High Schools was to create opportunity for the youth to have easy access to secondary education without difficulty.
The Minister of Education, Prof. Naana Jane Opoku Agyemang, said her outfit had observed that Mathematics and Science subjects were the major areas that most students failed during their final examinations.
Consequently, most students are prevented from furthering their education. To help stem the tide, she said 500 Mathematics teachers have already been trained in modern ways of teaching. Five hundred (500) laboratory technicians had equally been trained to help in the teaching of science in the various schools.
The Minister urged students to take their lessons more seriously to derive the needed benefit from the investment government and their parents were making in them.
Headmaster of the Akatsi Senior High Technical School, Mr. Ganya Agbenyega Ladzekpo, commended government for the provision of a dining hall complex for the school, as well as the administration block and classroom blocks, which construction are currently ongoing.
Present at the ceremony were the Speaker of Parliament, Mr. Edward Doe Adjaho, Volta Regional Minister, Madam Helen Adwoa Ntoso, district chief executives in the region, Members of Parliament from the region and chiefs among others.