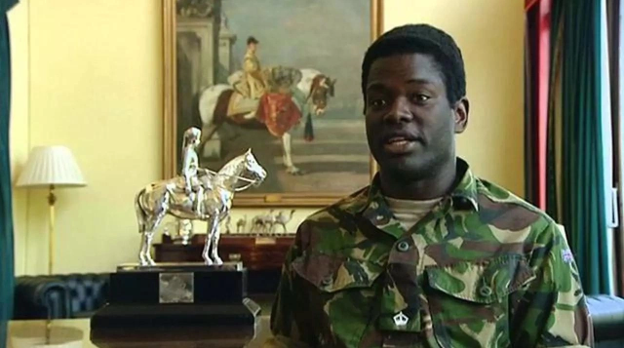 A Ghanaian-born officer from the British Household Cavalry, Major Nana Kofi Twumasi-Ankrah, has been appointed by Queen Elizabeth II to serve in her household as the first black equerry.

According to sources, Major Twumasi-Ankrah was handpicked by the Queen herself from a number of potential appointees.

The position is an extremely important one with the equerry more often than not, appearing with the Queen in her public appearances, Major Twumasi can be referred to as “the most visible man by the Queen’s side” due to the imminent retirement of the Duke of Edinburgh.

Major Twumasi-Ankrah, 38 years old, left Ghana for the United Kingdom 35 years ago with his parents.

He studied at the Queen Mary University of London and the Royal Military Academy in Sandhurst, going on to become the first black British Army officer to be commissioned into the Household Cavalry, and fighting in the Afghanistan war.

He currently lives in London with his wife, Joanna, and two daughters.

Known as TA to his intimate friends, Major Twumasi-Ankrah served as escort commander at the wedding of Prince William and Kate Middleton in 2011.

He also commanded a cavalry regiment of the British Army – the Blues and Royals – which took part in a ceremony at the Queen’s birthday parade in the same year.

Reports indicate that he will replace the current equerry, Wing Commander Sam Fletcher, later this year and is currently going through the transition process.

Major Twumasi-Ankrah had earlier stated that he was honoured to have played an important role in the Queen’s parade, having watched it on TV as a child.

“I would have never imagined that one day I’d command the regiment which I’d fallen in love with,” he was reported as saying.

The appointment by the Queen is also seen as one that will help clear any perceptions about racial discrimination in the Royal Household and British elite.

From what I’ve seen in the UK, our cultures really do mix and if I’m not a good example of that, I really don’t know what it is,” he reportedly added.