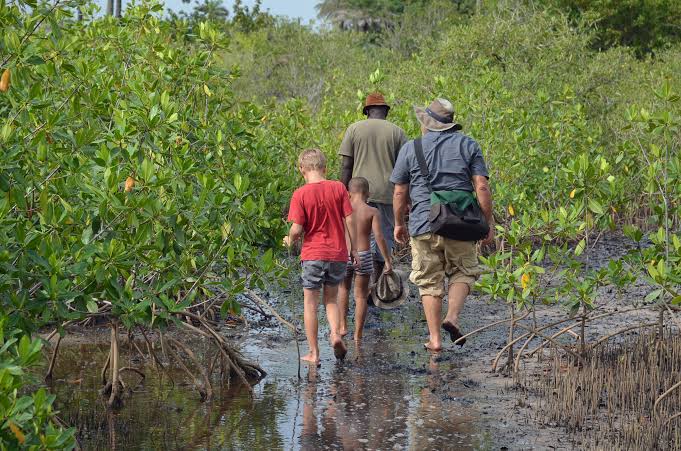 Part of the reason for the success of Haidar El Ali’s mangrove regeneration project in Senegal is that he is a hands-on kind of leader who has totally immersed himself in the fight against the devastating effect of de-forestation, intensive farming and rising salt levels due to climate change on the fragile mangrove eco-system. Senegal is winning the fight against climate change and mass deforestation thanks to a grassroot project led by the former minister of the environment to re-plant millions of mangroves along the coast, proving to other West African ocean-facing countries that they can reclaim the eco-systems they have almost eradicated. The mangrove restoration program, which El Ali and Oceanium started in 2006 in Casamance, southern Senegal, is the largest in the world says the Livelihoods Funds, which brings private companies together to build solutions to overcome the damaging effect of climate change on the environment. It was 10% funded by the government and the rest by private companies.

Drought in the 80s and early 90s, deforestation for timber used locally and for export and road building that cut off waterways all contributed to the loss of about 45,000 hectares of mangrove in Senegal said El Ali. Over the years Senegal lost almost half of its mangroves. Some neighbouring countries lost up to 80 percent. In other countries it was intensive farming, notably shrimp farming, urbanization and pollution that killed the mangroves. When they are healthy, mangroves, found in coastal and tidal areas, absorb excess water and protect the land around them from becoming too saline, vulnerable to floods and soil erosion. They also absorb and store carbon dioxide emissions that are one of the main causes of global warming.

“Replanting mangroves has become a third religion in Tobor,” Albert says. Haidar El Ali believes he has found an easy and lasting solution involving local communities critical in ensuring the program will endure. Mangroves are a living bio shield and protector against storms, filters pollutants, provide a critical food source and have a carbon storage capacity up to five times bigger than rainforests. Although El Ali has now left Oceanium to lead another re-forestation project in Senegal commissioned by the government, he is proud that he helped people re-conquer their land and build a barrier to the devastating effects of climate change. His wish today is that more countries will follow the example of the more than 100,000 Senegalese who made it happen. “You know when you plant a tree, it gives you so much and people all over the world realize that, but you just need to have to be there with them. Here it is possible, we have proved with the mangrove that it is possible and we will continue this operation and we won’t stop, I hope more and more people will get involved and that further and further we shall go,” he said.