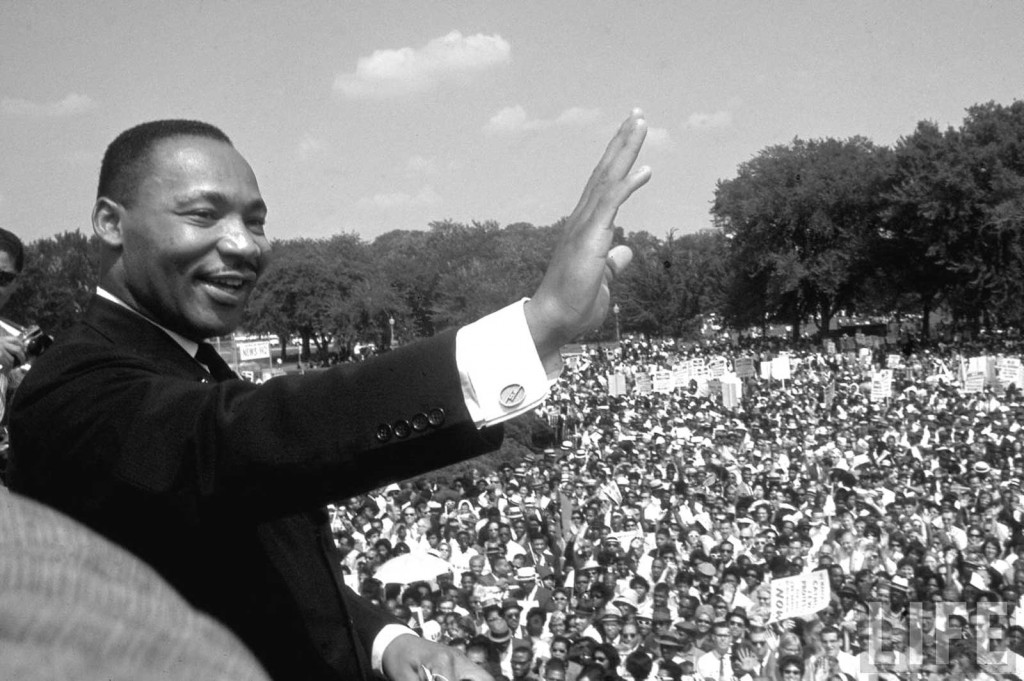 The Lincoln Memorial may be the most iconic place in the United States. Americans go there alone or with friends and family members to remember their most iconic president. They also go there en masse to protest awhen their nation has fallen short of Lincoln’s ideals, and their own. Visitors to the Lincoln Memorial can read inscriptions from Lincoln’s Gettysburg Address and his Second Inaugural. They can hear concerts and listen to speeches. After the Daughters of the American Revolution barred the African-American contralto Marian Anderson from performing at its Constitution Hall in Washington, D.C. in 1939, Anderson sang on the steps of the Lincoln Memorial. Beyoncé, Bono, and Bruce Springsteen performed there in 2009 as part of the inauguration festivities for President Barack Obama. One year later the conservative broadcaster Glenn Beck held a “Restoring Honor” rally at the same site. Of all these Memorial moments, however, the most celebrated came on the afternoon of August 28, 1963, when Martin Luther King Jr. stepped up to the microphone at the March on Washington for Jobs and Freedom and delivered his “I Have a Dream” speech, now one of the most famous utterances in U.S. history.

On June 11, 1963, the same day President Kennedy would address the nation on civil rights, leaders in the civil rights movement announced plans to march on Washington in order “to arouse the conscience of the nation over the economic plight of the Negro.” On June 22, President Kennedy met with leaders of the “Big Six” civil rights groups behind the march—the Congress of Racial Equality (CORE), the Southern Christian Leadership Conference (SCLC), the Student Nonviolent Coordinating Committee (SNCC), the Brotherhood of Sleeping Car Porters, the National Association of Colored People (NAACP), and the National Urban League—to urge them to cancel the protest. They refused. After a series of labor and religious groups joined the organizing team, the president gave the march his blessing. But he and his brother, Attorney General Robert Kennedy, worked behind the scenes to moderate it.

Young black militants worried that the event would turn into nothing more than a picnic. Older civil rights veterans worried that it might turn violent. Many in D.C. feared violence, too. On the day of the march, all bars and liquor stores in the District were closed, a baseball game between the Minnesota Twins and the Washington Senators was cancelled, and the D.C. police, reinforced by 2500 members of the National Guard, were on high alert. “The general feeling is that the Vandals are coming to sack Rome,” wrote the Washington Daily News. Meanwhile, King and his colleagues fretted about a low turnout. But supporters came by planes, buses, and trains, and on August 28, 1963, a crowd of perhaps 300,000 marched from the Washington Monument to the Lincoln Memorial in the largest demonstration in U.S. history.  The gathering was peaceful, the mood buoyant. At the Lincoln Memorial, Marian Anderson reprised her 1939 appearance by singing the “Star-Spangled Banner.” There were songs by Bob Dylan and Joan Baez, and speeches by representatives of each of the Big Six. John Lewis, a SNCC leader who would later go on to represent Georgia’s 5th district on Capitol Hill, had prepared a fiery speech that called out the federal government for its complicity in racism and segregation, and damned Kennedy’s civil rights bill as “too little and too late.” A draft found its way into the hands of Washington’s Archbishop O’Boyle (who was slated to give the invocation at the march) and through him to White House. Efforts to persuade SNCC to tone it down were unsuccessful until A. Philip Randolph, who had first imagined a march on Washington to protest segregation in 1941, personally prevailed on Lewis. “I have waited twenty-two years for this. I’ve waited all my life for this opportunity,” he said. “Please don’t ruin it. John, we’ve come this far together. Let us stay together.” As he recounts in his memoir, Lewis still spoke against Kennedy’s bill, but he did not promise to “march through the South, through the heart of Dixie, the way Sherman did . . . and burn Jim Crow to the ground.”

King, the last of the main speakers, began by noting that this march was happening one hundred years after the Emancipation Proclamation—“five score years ago,” he calculated, in language reminiscent of the Gettysburg Address. And yet “the Negro is still not free,” shackled by segregation, discrimination, and poverty. In keeping with the march’s dual emphasis on jobs and freedom, King spoke of those who put their names to the Declaration of Independence and the Constitution as “signing a promissory note” guaranteeing to Americans of all races “the unalienable rights of life, liberty, and the pursuit of happiness.” But America had not made good on this promise, he said, “So we have come to cash this check, a check that will give us upon demand the riches of freedom and the security of justice.”

Drawing on the prophetic tradition of Jeremiah, Amos, and Isaiah, who had chastised the people of Israel for their sinful ways and called upon them to repent and return to their covenant with God, King laid bare the sins of America. Throughout U.S. history, Americans have been tempted to turn the conditional covenant invoked by Massachusetts governor John Winthrop in his 1630 sermon aboard the Arbella into an unconditional covenant in which God blesses America no matter what Americans do. But King called for a revitalization of the more venerable tradition in which God would bless the nation if and only if it heeded the call of Winthrop and the Old Testament prophets to “do justly, and to love mercy” (Micah 6:8). Like the Hebrew prophets, King saw no clear demarcation between the sacred world of the spirit and the secular world of politics. Like Winthrop, he saw no clear line between biblical times and his own.

In words drawn from Amos that would later grace Maya Lin’s Civil Rights Memorial in Montgomery, Alabama, King said, “We will not be satisfied until justice rolls down like waters and righteousness like a mighty stream.” And in words based on the passion of Jesus on the cross, he urged those who had been “battered by the storms of persecution and staggered by the winds of police brutality” to stand firm in “the faith that unearned suffering is redemptive.” “Now is the time,” he said, in a recurring refrain, “to make real the promises of democracy.”

As King was delivering these prepared remarks, the gospel singer Mahalia Jackson reportedly cried out for him to talk about his dream. Two months earlier, in Detroit, King had given a speech about his dream for America. Few had remarked upon it, but it had moved Jackson, and soon King’s was moving millions of Americans watching him on national television. Setting aside his written speech, King metamorphosed from prophet to visionary, hewing “a stone of hope” out of “the mountain of despair.” Improvising on his vision of the American dream to the cadences of the Bible, he “turned the Lincoln Memorial into a Baptist sanctuary and preached an inspiring sermon,” according to Michael Eric Dyson in his book I May Not Get There With You: The True Martin Luther King, Jr. As his words picked up speed with the “urgency of now,” he shared his vision of an America in which the equality promised in the Declaration would be made manifest in the South and the freedom promised in “My Country, ‘Tis of Thee” would ring “from the prodigious hilltops of New Hampshire” and “the snowcapped Rockies of Colorado” to “Stone Mountain of Georgia” and “Lookout Mountain of Tennessee.”

King concluded his speech by raising his hands and allowing himself to imagine “that day when all of God’s children, black men and white men, Jews an Gentiles, Protestants and Catholics, will be able to join hands and sing in the words of the old Negro spiritual, ‘Free at last! Free at last! thank God Almighty, we are free at last!”

The next day the news was neither the record turnout nor King’s speech but the fact that the city had not been overrun by rioting. Nonetheless, the success of the march and the power of King’s words gave the civil rights movement a huge lift, pressuring Congress to pass the Civil Rights Act in 1964 (when there were only five African Americans in the House) and the Voting Rights Act of 1965 (when there were only six). America, it seemed, was willing to make good on the bounced check. But then the movement lost its momentum. King, who was named Time magazine’s Man of the Year in 1964, turned increasingly to economic issues, and to protesting the war in Vietnam. More militant black voices gained ground, including the Nation of Islam leader Malcolm X, who famously dismissed the March on Washington as the “Farce on Washington.” Then came the assassinations of Malcolm X in 1965, and King and Robert Kennedy in 1968. In ensuing decades, anniversaries of the March on Washington were reprised by rallies in Washington, D.C., and King’s speech emerged as a yardstick to measure America’s progress on racial equality, economic justice, and freedom for all.

Since his death, King has made the migration from man to martyr, honored with a national holiday in 1986 and with a memorial of his own on the Mall in 2011. So it should not be surprising that the words of his most famous speech have been appropriated and misappropriated, both at home and abroad. According to Drew Hansen, by the early 1980s, “it was excerpted in countless American studies textbooks, reprinted on posters sold in college bookstores, and emblazoned on pins and T-shirts sold at civil rights rallies. . . . In Nelson Mandela’s victory speech after South Africa’s first multiracial elections, he declared that black Africans were ‘Free at last.’ Protestors in Tiananmen Square held up billboards with pictures of King and the words, ‘I have a dream.’”

King’s speech, which Andrew Young described as “our Declaration of Independence, our declaration of freedom, and our Gettysburg address,” has inspired gay rights activists to dream of a day in which “the sons of homosexuals and the sons of heterosexuals will be able to sit down together at the table of brotherhood.” King’s dream of a day when his children “will not be judged by the color of their skin but by the content of their character” has also been used by William Bennett, Rush Limbaugh, and other conservatives to criticize affirmative action as “reverse discrimination,” despite the fact that King advocated “special, compensatory measures which could be regarded as a settlement in accordance with the accepted practice of common law.”

In 2000, “I Have a Dream” was named by a panel of 137 academics the greatest political speech of the 20th century. In 2009, with the inauguration of Barack Obama as America’s first African-American president, there was much talk of King’s dream, and of Obama playing Joshua to his Moses. But according to a study entitled, State of the Dream 2009: The Silent Depression, the incarceration rate for black men that year was more than six times that for white men. The unemployment rate for young black men was 33 percent. The portion of all blacks in poverty was 24 percent, versus 8 percent of whites. So Americans are still struggling to answer the question, posed by Harlem Renaissance poet Langston Hughes: “What happens to a dream deferred?”

Excerpted from The American Bible: How Our Words Unite, Divide, and Define a Nation by Stephen Prothero (HarperCollins, 2012).