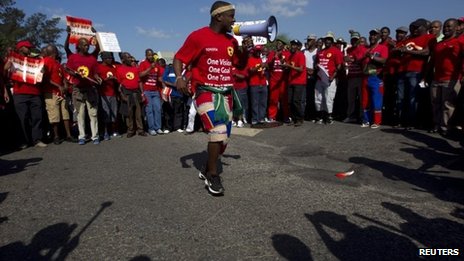 South African construction and airport workers have gone on strike to demand higher wages, dealing another blow to the troubled economy.

Car workers have already been on strike for a week, while gold miners are also threatening to down tools.

The industrial unrest comes after the rand has lost 17% of its value against the dollar this year.

The airport strike has led to some delays at Johannesburg’s main international airport.

The BBC’s Will Ross in South Africa says strikes are common at this time of year – when new annual pay deals are negotiated.

The government has called on the workers to ensure all strikes are peaceful.

Some 90,000 construction workers were set to walk out on Monday, according to the National Union of Mineworkers.

The strike by employees of car manufacturers is said to be costing the country $60m (£40m) a day – the sector accounts for 6% of annual income, according to Reuters news agency.

Car workers want a 14% pay rise, while gold miners have rejected a 6% offer.

Analysts say President Jacob Zuma is under pressure from both sides of the political spectrum.

Some members of the governing African National Congress want him to do more to relieve poverty, while the business community is urging him to focus on reducing bureaucracy, attracting foreign investment and speeding up South Africa’s sluggish economic growth.