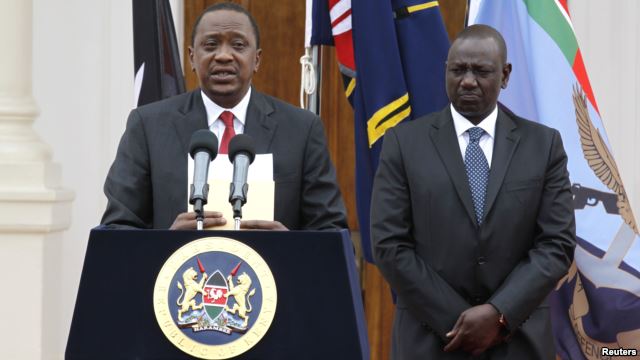 The International Criminal Court has recently dismissed charges against Kenya’s deputy president and a local radio director for their alleged roles in 2007-2008 post-election violence. The ruling could have profound political implications as Kenya heads to elections next year.

Thousands of people took to the streets in Kenya’s Rift Valley region to celebrate after the International Criminal Court ruled to vacate charges against Deputy President William Ruto.

Colonel Muema, the secretary-general of New Ford Kenya, one of the political parties in the ruling Jubilee Coalition, welcomed the ruling.

“It bolsters him politically, very seriously, both nationally and in his backyard Rift Valley, because now he will be able to act more freely, more forcefully and make a decision without looking over his shoulders,” Muema said.

Kenyan political writer Barrack Muluka said if Ruto runs for president in 2017, the country may not have a clear winner.

The election could pit him against President Uhuru Kenyatta, potentially reigniting communal rivalries that led to the violence after the 2007 election.

“If he calculates and he has got that popular support following within Rift Valley, he could also say to himself, ‘Why should I be the deputy president when I could be president?’  And of course, he will throw the game wide open.”

In 2007, Kenyatta and Ruto were on opposite sides. A number of people were killed and displaced in the violence that followed the 2007 election.  The ICC charged Kenyatta, Ruto, and a Kenyan radio director, with crimes against humanity for allegedly orchestrating the violence.

Kenyatta and Ruto then joined forces and won the 2013 election.

The two men insist their Jubilee coalition has reconciled communities in the Rift Valley, site of the most intense post-election violence in 2008.

Some accuse the current administration of favouring Kenyatta and Ruto’s tribes, the Kikuyu and Kelenjin, something the government denies.

Muluka said the ICC ruling this week sends a message there is no accountability.