In an Africa, dealing with monumental infrastructure and energy deficits; a teeming youthful population desperate for jobs and opportunities; and currently facing what is arguably its most daunting challenge – the COVID-19 pandemic; the continent has never been as in need of leaders, who care about the development and welfare of its people, as it does now. Leaders who transcend myopic classifications and are pan Africanists in the mould of Thomas Sankara, Julius Nyerere and Nelson Mandela. Key critical stakeholders have also never agreed as they are today, that Africa has one of such men in Dr Akinwumi Adesina. He crisscrosses the globe preaching the gospel of a resurgent Africa and has been severally nicknamed Africa’s developer-in-chief, Africa’s promoter – in-chief, but, one stands out, Africa’s Optimist-in-Chief.

A distinguished development economist, and agricultural development expert with over 28 years international experience, Dr Adesina was at different times the Vice President of Alliance for Green Revolution in Africa; Associate Director, Rockefeller foundation; and Principal Economist, International Institute for Tropical Agriculture, IITA. He also served as Nigeria’s Minister of Agriculture and Rural Development from 2011-2015, during which time he pioneered innovative agricultural investments projects to expand opportunities for the private sector, receiving several awards and accolades for excellence during the course of work. Dr Adesina was elected in 2015 as the 8th President of the African Development Bank – the first Nigerian to head the leading development institution in its long chequered history.

The Economic Community of West African States, ECOWAS at its 56th ordinary session of the Authority of Heads of States, endorsed the reelection of Dr Akinwumi Adesina as the President of the African Development Bank.

In a communique issued at the end of the meeting, the authority noted that “in recognition of the sterling performance of Dr Akinwumi Adesina during his first term of office as President of the African Development Bank, the Authority endorses his candidacy for a second term as the President of the bank.”

Preceding his endorsement for a second term, Dr Adesina had won the 2017 World Food Prize – a parallel to the Nobel Peace Prize. The World Food Prize on its website, while announcing the award, stated that “through his roles over the past two decades with the Rockefeller Foundation, at the Alliance for a Green Revolution in Africa (AGRA), and as Minister of Agriculture of Nigeria, Dr Adesina has been at the forefront of galvanizing political will to transform African agriculture through initiatives to expand agricultural production, and thwart corruption in the Nigerian fertilizer industry.”

In February 2019, Dr Adesina co-won the Sunhak Peace Prize, alongside Waris Dirie, the tireless fighter for female genital mutilation and women’s rights in Africa. Later the same year, he was overwhelmingly voted as the African of the Year 2019, in the African Leadership Magazine Persons of the Year Awards by Africans from all spectrum of society with over 68% of total votes cast in his category – the continent’s leading vote-based poll. And there has been a deluge of several other endorsements from governments, individuals and organizations from within and outside the continent.

Like the famous quote, “behind every successful person lies a pack of haters”, It was therefore unsurprising to see the uninspiring media attack cloaked in the garb of revelation by “whistleblowers-cum-group of concerned staff”. This weak attempt at pulling down a shining star, published in the French tabloid, Le Monde, would certainly pass for a malicious piece, designed to muddy the waters. One can also safely say that they are meant to detract the African Development Bank from focusing on its core mandate, which it had tenaciously pursued under the leadership of its President, Dr Adesina.

Someone of Dr Adesina’s pedigree is not opposed to scrutiny. He has become an apostle for good governance and best practices, the twin message that has become his anthem at meetings with key African stakeholders. According to the 2018 Aid Transparency Index Report, released by Publish What you Fund, African Development Bank was ranked 4th among 45 development organizations around the world.

A careful study of the issues as raised by the ‘whistleblowers’ in their report, which was the source of the Le Monde article – calls for a closer look at the ‘invisible ink’. In the story, he was accused among other things of a plan to “Nigerianize the AfDB by giving compatriots key positions, but also by more easily granting lines of credit to leading Nigerian companies.”

Nothing can be further from the truth. Nigeria, though the largest shareholder in the Bank with about $6 billion portfolio, appears to be getting the short end of the projects. For instance, an approved list of projects on the website of the AfDB showed about 75 projects totalling $64, 584, 648, and none of the majors was mainly targeted at Nigeria alone. While Senegal, Cameroun, Tanzania, Rwanda, Namibia amongst others, had specific projects aimed at the individual country levels, Nigeria was lumped more in the multi-countrywide projects categories. In any case, one should think that Nigeria, with its vast population and very well known energy and infrastructure problems, and as the largest shareholder of the Bank, should have a much more significant share of the Bank’s projects.

It may therefore not be surprising if the ‘invisible ink’ in these accusations is linked to Dr Adesina’s stubborn resolve to detangle Africa from the shackles of over-dependence on others but seek self-reliant African solutions to Africa’s problems. He has also taken upon himself the onerous task of challenging the negative stereotypes about the continent. One would also wonder, if the timing of these accusations published in the French tabloid Le Monde, and the recent calls by two French doctors on live television for COVID-19 vaccine trial tests to be carried out in Africa, at a time that the AfDB had just successfully listed a US $3Billion Social bond on the London Stock Exchange to help Africa deal with the pandemic, are linked?

It was appalling to see two French doctors on the French television channel, LCI, propose that the potential vaccine for the Virus be tested on Africans first, before deploying it to Europe and Australia. Instantly, this set-off a backlash from people of goodwill from around the continent and beyond. This kind of thinking from some westerners is what leaders like Dr Adesina have consistently challenged, and some vested interests aren’t happy about it. Make no mistake, Africa has some worthy partners in the west, but her adversaries come in equal measure.

On his part, Dr Adesina, in his response to the Le Monde article, has said that “the African Development Bank has a very high reputation for good governance.” He restated, the Bank’s confidence in the governance system put in place by the board of Governors of the Bank and asked that the ethics committee of the Bank be allowed to do its job without interference. We dare say without any media trials also.

Dr Adesina, since his emergence as the 8th President of the Bank in 2015 has led the Bank on what many analysts have described as an exceptional tenure. A leader in agricultural innovation for over 28 years, Dr Adesina has contributed significantly to food security in Africa, aimed at improving the lives of millions in the continent. The Bank, under Dr Adesina, has recorded many firsts and marked several milestones including:

The African Development Bank Group continues to play a central role in Africa’s development under the leadership of Dr Adesina. We, therefore, call on all stakeholders, including the UN, WHO, President Ramophosa-led African Union, Afreximbank and other institutions, currently at the forefront of pushing for the continent’s survival in the face of the COVID-19 pandemic, to band together and do all it takes to save the continent, and indeed the world by defeating the virus in Africa, rather than give credence to a seemingly stage-managed media spat. As Prime Minister Abiy Ahmed rightly said, “If COVID-19 is not defeated in Africa it will return to haunt us all”. 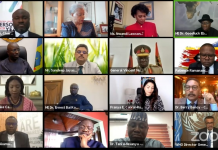 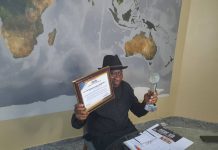 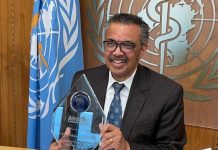