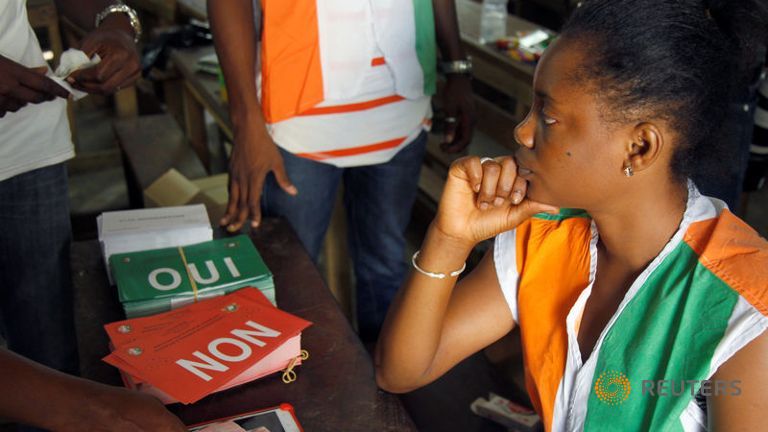 Voters in Ivory Coast overwhelmingly approved a new constitution in a weekend referendum, according to provisional results announced by the elections commission on Tuesday, though opposition groups denounced the turnout figure as fraudulent.

President Alassane Ouattara had argued that the new charter would help the nation turn the page on a decade-long crisis that was capped by a 2011 civil war and create the stability needed to cement its status as Africa’s rising economic star.

The results showed about 93 percent of voters backed the text on a turnout of around 42 percent, commission president Youssouf Bakayoko said on state-owned television. There was no turnout threshold for the vote to be deemed valid.

Opposition leaders had called for a boycott of the vote, branding the constitution a ploy to further entrench Ouattara’s political coalition.

The boycott meant there had been little doubt about the outcome and the focus was on turnout as the key measure of whether there was broad public support for the new constitution.

The constitution “is not legitimate, because the people rejected it.”

A spokesman for a rival FPI faction called the voter participation figures “fabricated”.

Turnout in many areas on voting day appeared visibly lower than during last year’s presidential election when 53 percent of registered voters cast ballots.

The current constitution, drafted under military rule after a 1999 coup, was at the heart of Ivory Coast’s prolonged unrest.

In its most controversial clause, it says presidential candidates’ parents must both be natural-born Ivorians – a swipe at northerners, many of whom, like Ouattara, have family ties that straddle the borders with Burkina Faso and Mali.

The new constitution scraps that rule, which was used to disqualify Ouattara from a poll in 2000, and now only one parent must be Ivorian. It creates a post of vice president and a senate. The president says all these new measures will guarantee more political stability.

The new text also allows future changes to the constitution to go ahead without a referendum and with a two-thirds majority in parliament, a body now dominated by Ouattara’s allies.

The results of the referendum must now be validated by the constitutional court.