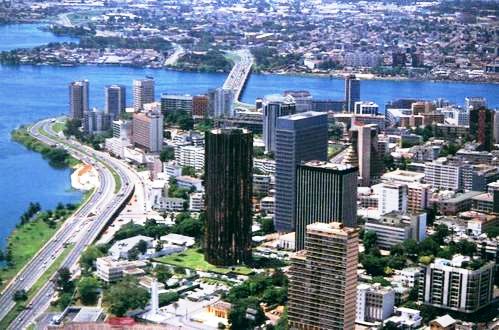 From FinancialTimes. Story by Maggie Fick.

Abidjan, the commercial capital of Ivory Coast, buzzes with the energy of a country in a hurry to make up for lost time.

Checkpoints no longer choke traffic in a city where warring gunmen fought in the streets just over four years ago. A third bridge across Abidjan’s lagoon was completed last year and has eased traffic, while towering cranes and billboards announcing construction projects signal what is to come.

The world’s top cocoa producer was for decades the economic engine of French-speaking West Africa and the region’s business hub. But a civil war that began in 2002 sank the country into stagnation. Ivory Coast lost its standing as one of the most advanced economies on the continent while neighboring Ghana and other countries took off amid a wave of growth in Africa.

Now, Ivory Coast is staging a comeback under the leadership of President Alassane Ouattara, the economist who took office four years ago after a post-election crisis that killed 3,000 people. The economy has grown at a yearly average of about 9 percent since 2012, according to government figures,making it one of Africa’s best performers, while investors are jostling to be a part of the government’s infrastructure building spree.

A short drive from the central business district, it’s apparent that strong growth has not had a trickle-down effect. Many young people can’t find work including those with university degrees. Maternal mortality rates are similar to those of far poorer countries in the region such as Guinea and Niger. The government says it needs more roads, bridges and power plants by both the government and the private sector.

Critics say Ouattara’s government is adept at selling itself, but less competent in the follow-through. For example, a ban on plastic bags is enforced in Abidjan, but not elsewhere.

Some business people complain that little happens without the right connections. A foreign entrepreneur says the government promised to support small and medium-sized enterprises through an industrial zone, but has so far failed to deliver reliable water and electricity.

Doumbiea Hamed, an unemployed father of four, says President Ouattara is making a difference. “What he is developing first is the major roads because we are a country that produces a lot and we cannot live without working infrastructure. So he is starting with this and we hope that we will soon feel the developments here.”