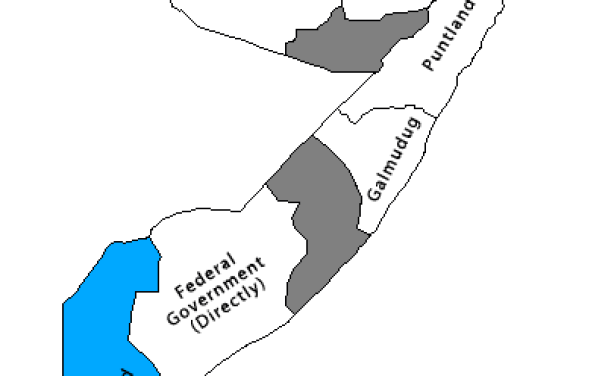 Kenya has endorsed the latest regional state in Somalia, a move that is likely to offend Mogadishu.

The Central government of the neighboring country has been uncomfortable with Kenya’s “continued fragmentation” of its fragile administration.

“Kenya would assist in stabilising individual states of the Federal Government of Somalia as prerequisite to bringing stability to the whole country and the region at large,” Ruto said.

Sharif Hassan is a former Finance minister and speaker of parliament. He was ousted in 2011 as speaker after he held “unauthorised” talks with the Union of Islamic Courts which later morphed into the al Shabaab militia group.

He has business interests in Nairobi as well.

Mogadishu has been uncomfortable with Kenya’s “crowning” of regional leaders in the name of Somalia’s unity and prosperity.

Last May, Somalia temporarily recalled its ambassador, partly in protest of Kenya’s close association with the Jubaland region.

The Interim South West State of Somalia which brings together the Bay, Bakool and Lower Shabelle regions has its capital in Baidoa and it borders Jubaland to the east.

It was inaugurated in November last year in a process supported by Intergovernmental Authority on Development and United Nations Operations in Somalia (Unisom).

Baidoa is the headquarters of African Union Mission to Somalia’s Sector Three, manned by Kenyan and Ethiopian forces. It is considered an important town in the fight against al Shabaab.

The formation of the state in Last November was vehemently opposed by the Somalia’s parliament led by speaker Mohamed Osman Jawaari. There were also demonstrations in Baidoa opposing the new administration.

The South West state becomes the fourth semi-autonomous state of Somalia. Others are Puntland, Somaliland and Jubaland.

Somaliland cut links with Mogadishu years ago and is fighting for international recognition as an independent country. It has democratically elected its president and is largely considered a success story.

Abdiwahab Sheikh Abdisamad, an analyst with Southlink Consultants and Horn of Africa political scientist at Kenyatta University said Somalia’s lack of a clear foreign policy towards Kenya has created fodder for former warlords to claim leadership within their ethnic base.

“While the central governmental of Somalia was aware and actually involved in formation of this state, the latest visit to Kenya by Shariff Hassan must leave Mogadishu uncomfortable as it considers it subordination by Hassan,” he said.

Analysts say Kenya and Ethiopia want local administrative units to support them against al Shabaab and to avoid any influx of refugees into their countries. The state is also considered a favourite destination of repatriated Somalia refugees from Kenya.

Kenya was instrumental in the formation of Jubaland, another self-declared autonomous region, which it sought to use as a buffer against al Shabaab. Jubaland is led by Sheikh Ahmed Mohamed Islam (Madobe) who fought alongside the Kenya Defence Forces during Operation Linda Nchi in 2011.

He was the commander a militia called the Ras Kamboni brigade. Efforts to speak to speak to officials at Kenya’s Foreign Affairs ministry did not materialise as phones went unanswered.

Yesterday, Ruto said Kenya “has no other interest in Somalia other than bringing peace and stability to the country”.

“We do not want anybody to take advantage of the fragile situation in Somalia and incubate people to destabilise the country and the region,” he said.

Ruto said the government is ready to participate in the reconstruction of Somalia through the Joint Cooperation Commission established in 2013 to tackle development issues between the two countries.

“As African leaders, we should be in the front line in helping our brothers and sisters in Somalia,” he said.

“We can be limited in capacity but not in willingness to assist.”

On his part, President Sharif Hassan Sheikh Adan thanked Kenya for its support against al Shabaab.

“We are happy with Kenya’s assistance in resolving the problems in Somalia, and we are urging that Kenyan troops be allowed to traverse the interior of the country which is still under the control of al Shabaab and help in liberating it,” he said.

He appealed to Kenya to assist in building the capacity of his government especially in police, the justice system and in intelligence gathering.