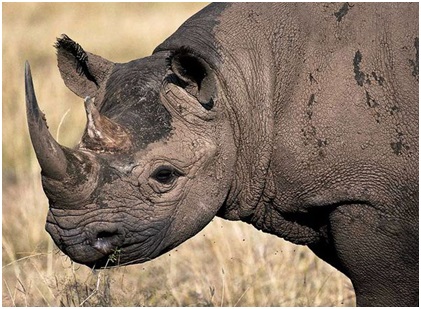 Poaching has risen sharply in Africa in recent years, with rhinos not the only animals targeted. Whole elephant herds have been massacred for their ivory. The lucrative Asian black market for rhino horn has driven a boom in poaching across Africa. Asian consumers believe the horns have powerful healing properties.  In August, poachers shot dead a white rhino in Nairobi’s national park, a brazen raid in one of the best guarded sites in Kenya.

Kenya will place microchips in the horn of every rhino in the country in a bid to stamp out a surge in poaching the threatened animals, wildlife officials say. Kenya has just over 1,000 rhinos, and the tiny chips will be inserted and hidden in the horn, which is made of keratin, the same material as fingernails or hardened hair.  “Poachers are getting more sophisticated in their approach,” Paul Udoto, spokesman for the Kenya Wildlife Service (KWS), told AFP news agency.  “So it is vital that conservation efforts also follow and embrace the use of more sophisticated technology to counter the killing of wildlife.”  The World Wildlife Fund donated the chips as well as five scanners at a cost of $15,000, although tracking the rhino to dart them and fit the device will cost considerably more.

However, it will boost the ability of police to prosecute poachers or traffickers, allowing for all animals to be traced and providing potential vital information on poaching and smuggling chains. “Investigators will be able to link any poaching case to a recovered or confiscated horn, and this forms crucial evidence in court, contributing towards the prosecution’s ability to push for sentencing of a suspected rhino criminal,” KWS said in a statement.  Simply chopping the horn off the rhino has limited impact, Udoto explained.”The horn grows back … and we’ve so sadly found that poachers can kill a rhino at first sight and only then find that its horn has been removed,” he said.