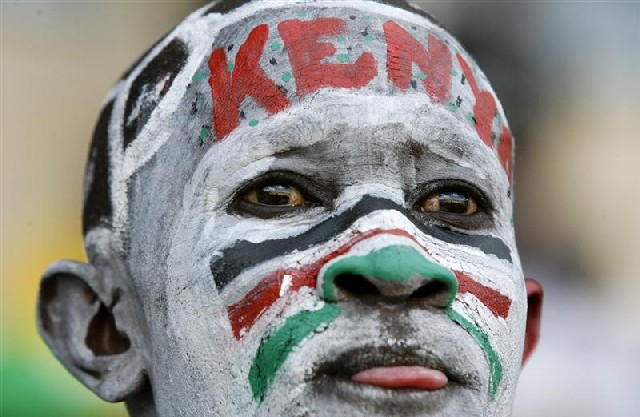 On  March 17, Kenyan champions, Gor Mahia, qualified for the quarter-finals of the CAF Confederations Cup after edging out Petro Atletico of Angola 1-0 in the final group D match played at Nairobi’s  Moi Stadium Kasarani.

Rwandese striker Jacques Tuyisenge scored the decisive goal in the 56th minute of the match from the spot to hand Gor the crucial win in Sunday’s pivotal match.

Gor who finished the match with nine men, also had their coach sent to the stands.

Kogalo, as Gor is affectionately called, dominated the better part of the opening half, pinning the Angolans to their own half but worked overtime to contain pressure from their opponents in the second half.

Tuyisenge had a sniff at a  goal in the fourth minute of the game but the Rwandese forward who had been put through by Boniface Omondi shot straight to the hands of Elber Delgado.

Omondi had intercepted the ball a few metres from the box and despite the acres of shooting space available, he teed up Tuyisenge whose shot was well gathered by Delgado to the disappointment of the already charged up Gor fans.

Two minutes later, Omondi made good use of his lightning pace when he outsprinted his marker on the left wing but skied his final shot under the pressure of the last man Daniel Kilola.

Gor continued to press the gas pedal in their quest for the opening goal but most of their build-ups ended prematurely in Atletico’s area as their defenders contained the pressure from the marauding forwards.

The visitors who hardly advanced past the half-pitch line in the opening ten minutes had their first attempt in the 16th minute after Harun Shakava blocked Tiago Leal’s cross for a corner but the unmarked Alberto Miguel headed wide.

Gor’s bid to break the deadlock was dealt a massive blow in the 35th minute as holding midfielder Ernest Wendo was sent for an early shower for landing his studs on Vladmir Antonio Felix while contesting for an aerial challenge.

Wendo had risen high for a header which he partially won but had his boots landed on Felix’s chest while trying to win the rebound as well as stop him from dribbling to the already exposed defence.

Tempers flared up at the technical bench with three minutes to play as Gor coach Hasan Oktay heavily protested a number of calls by the Moroccan referee Redouane Jiyed which he deemed unfair.

The referee reacted by sending the defiant Cypriot coach to the stands as the two sides broke for the breather.

Gor picked from where they left in the first half, defying their numerical disadvantage to pin the Angolans in their own half in desperate search of the opening goal.

Their efforts paid off in the 56th minute after Corte Augusto De Jesus brought Omondi down in the box leaving the referee with no option but to point to the spot where Tuyisenge sent the ball past Delgado to give Gor the lead.

Batambuze would later earn his marching orders in the 74th minute for tagging his marker’s shirt in the full glare of both the referee and the linesman.

The Kenyan champions who would have won the match by 3-0 after Tuyisenge was denied by the bar twice in the final minutes of the match held on to their solitary goal to make it through to the quarters of the continental showpiece.