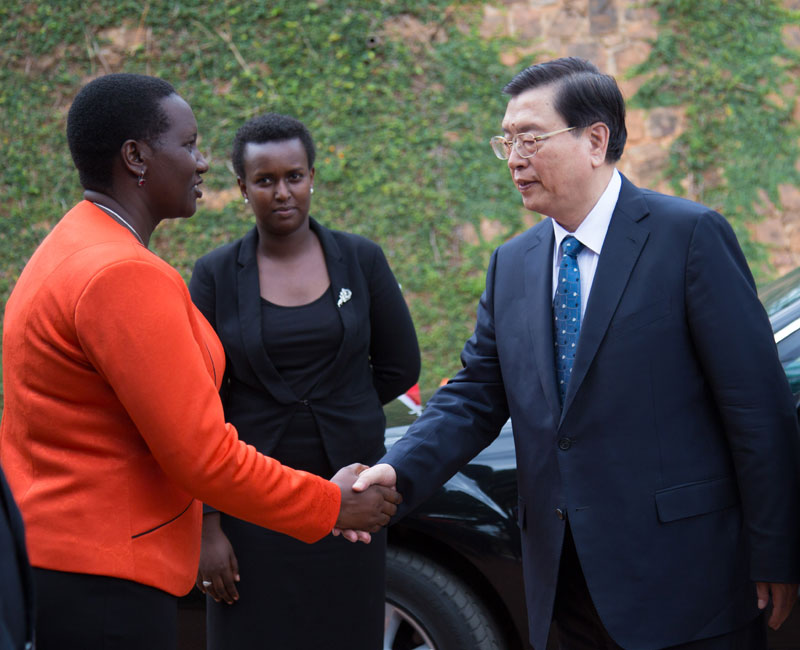 The chairperson of the National People’s Congress of China arrived in the country, yesterday, on a two-day official visit, which officials have described as significant and meant to boost the two countries’ relations.
Zhang Dejiang, who is visiting Rwanda for the first time, yesterday, visited Kigali Genocide Memorial Centre in Gisozi, where he observed a minute of silence and laid a wreath in honour of more than a million victims of the 1994 Genocide against the Tutsi.
Zhang then met with Speaker Donatille Mukabalisa for a closed-door meeting along with a team of legislators who head different committees in the House.
“Such a high ranking official normally visits few countries and we are privileged to be among them,” Mukabalisa said.
“China has a commitment to boost its relationship with Africa, including Rwanda, starting with the political relations. He is here as a high-level political official from China so that we can strengthen our relations starting with our mutual trust”
The Ambassador of China to Rwanda, Pan Hejun, said last week that Zhang’s visit is a milestone that will enhance relations between the two countries.
“The two sides will take this opportunity to further enhance mutual political trust, positively evaluate the bilateral relations and cooperation achievements, and extend the pragmatic cooperation in all fields,” he said.
Amb. Pan said the visit is a top legislature exchange between the two countries and a key part of implementation of the Johannesburg Summit of the Forum on China-Africa Cooperation held last December.
At the summit, Chinese President Xi Jinping announced a three-year $60-billion China’s aid to Africa, which includes a $5-billion package that African countries will access in grants and zero interest loans, $35 billion in concessional loans and export credit lines as well as another $5 billion to boost the China-Africa Development Fund and support for SMEs.
The $60-billion package also includes $10 billion as initial contribution for the establishment of a China-Africa Fund for production capacity cooperation, which is likely to help industries on the continent.
Rwanda is expected to benefit from the package to upgrade Masaka Hospital, construct a 54-kilometre road network in Kigali, and a modern government office complex in Kigali that will house the Prime Minister’s office and four other ministries.
In 2014, bilateral trade between the two countries was $207 million with imports from China dominating the exchange.
Currently, in a bid to boost Rwanda’s nascent export sector, China extends duty-free treatment to 95 per cent of Rwandan products in the Chinese market.
Today, Zhang is expected to hold talks with President Paul Kagame.
Before leaving, he will attend the groundbreaking ceremony for the construction of office complex that will house the Prime Minister’s office and the four ministries.
Zhang is the highest ranking Chinese leader to visit Rwanda since the two countries established diplomatic ties in 1971. He is the third most powerful person in Chinese political system after the president and premier.