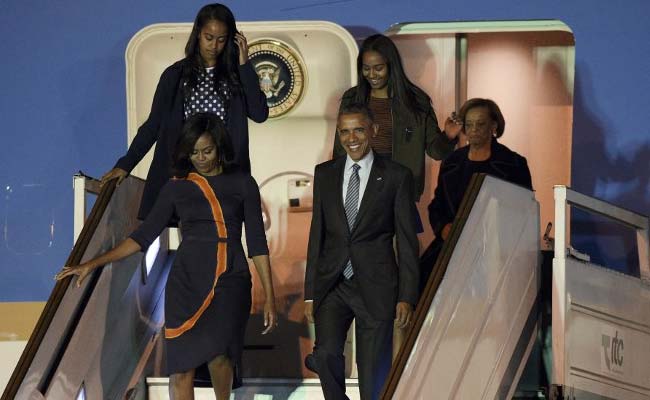 U.S. President Barack Obama arrived in Argentina on Wednesday to reset diplomatic relations and strengthen trade ties with a country that was part of South America’s left-wing bloc until pro-business President Mauricio Macri took power in December.
Obama’s two-day visit marks a rapprochement after years of sour relations and is a sign of support for Macri’s investor-friendly reforms aimed at opening up Latin America’s third biggest economy.
Obama and his family landed in Buenos Aires shortly after 1 a.m. and were met by Argentina’s foreign minister, Susana Malcorra, before being whisked away to the U.S. ambassador’s residence.
The U.S. leader will hold talks with Macri on Wednesday morning ahead of a joint press conference. He will also lay a wreath at the Buenos Aires Metropolitan Cathedral, where Pope Francis has celebrated Mass, and meet young entrepreneurs before attending a state dinner.
French President Francois Hollande and Italian Prime Minister Matteo Renzi also recently visited Argentina, quick to reach out to a South American leader whose predecessor forged closer ties with Venezuela, Iran and China.
“It’s good that Obama is visiting. Closing ourselves off in a Chavez-like system was not the way to go,” said Claudio Mazzakalli, a 32-year-old locksmith, referring to Venezuela’s former socialist president, Hugo Chavez.
In his first 100 days in office, Macri lifted capital and trade controls, slashed bloated power subsidies and cut a debt deal with “holdout” creditors in the United States. U.S. officials say Obama has been impressed by the pace of reform.
Yet Macri still has to grapple with double-digit inflation, a yawning fiscal deficit and a shortage of hard currency.
Luring foreign investors is a cornerstone of his strategy to revive the spluttering economy, and Obama arrives with a large business delegation in tow.
Left-wing political parties have promised protests during Obama’s visit, which coincides with the 40th anniversary of the coup on March 24, 1976, that installed the “dirty war” military junta.
Some are wary of too warm a detente with Washington, an early supporter of the bloody 1976-1983 dictatorship.
“The timing of the visit is a provocation,” said Miguel Funes, 39, a lawmaker from former President Cristina Fernandez’ Front for Victory party.
The United States initially backed the dictatorship, which killed up to 30,000 people in a crackdown against Marxist rebels, labor unions and leftist opponents.
Many were “forcibly disappeared” – a euphemism for kidnapped and murdered – and hundreds of children were stolen from their imprisoned parents.
The United States announced last week it would declassify documents from U.S. military and intelligence agencies related to the dictatorship, a move aimed at soothing criticism over the timing of the trip. Obama will also honor the victims of the dictatorship on Thursday before flying to Patagonia.
The last U.S. president to visit Argentina was George W. Bush, who attended the Summit of the Americas in 2005, when South America’s leftist “Pink Tide” was in full flow and anti-U.S. sentiment ran high across the region.
The turbulent relationship stretches back decades. In the 1990s, relations were so close the foreign minister of right-wing President Carlos Menem described them as “carnal”.
But Argentina’s 2001-2002 economic depression left millions of Argentines fuming against the U.S.-backed neoliberal reforms of the 1990s. Relations turned increasingly hostile during Fernandez’s 2008-2015 rule.
Macri has urged a “productive and intelligent” relationship. He and Obama will discuss the economy, climate change and drug trafficking. U.S. officials say a number of bilateral agreements are expected.
Carlos Guglielmi, a bank worker, welcomed the thaw in relations but said his main concern is Macri’s economic reforms.
“It’s good that Macri has Obama’s support. But what he needs is the support of the Argentine people,” said Guglielmi. “If he governs only for the rich and keeps cutting state spending, his popularity won’t last.”