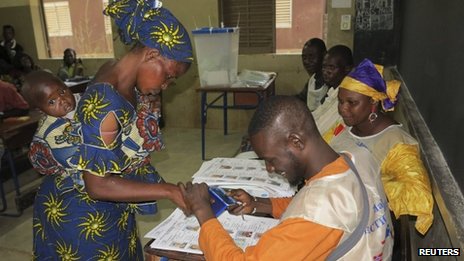 Mali has voted amid high security in parliamentary elections, the second nationwide poll since a French military intervention against Islamist militants in the north earlier this year. There was a low turnout, with some incidents of unrest. Mali held a peaceful presidential election in August, but since then there has been a surge in violence. Extra French troops were deployed to Kidal, where two French journalists were killed earlier this month. A total of 6.5 million people are registered to take part in the first round of elections to choose a parliament. Voting began at 08:00 GMT in the West African nation and ended at 18:00.

But turnout nationwide appeared to be far lower than for the presidential elections three months ago.  Many people who stayed away stated that they were unhappy with the process. Some cited attempts by party agents to offer cash for votes. Others claimed Mali was not ready for elections because Tuareg rebels are still controlling pockets of the north. There were reports of ballot boxes being stolen by armed men in the city of Timbuktu. In the northern town of Kidal, Tuareg separatists, armed with stones, reportedly smashed car windows and prevented voters from casting their ballots.

However, European and African observers who will produce their reports in the next few days – welcomed the generally peaceful outcome of voting and said they would consider the election credible.  “Election officials know what they are doing,” said Louis Michel, head of the EU’s observation mission. “Everything seems to be going as it should. From a logistical point of view, I didn’t observe anything unusual.”‘

Malian President Ibrahim Boubacar Keita said he was satisfied with the election process.  “If you had told me a few months ago that we would be staging parliamentary elections I would have thought I was dreaming,” he said. “Mali is standing on its own two feet and moving forward.”

In Kidal and Tessalit, only the party of President Keita featured on ballot papers. Opposition candidates said it was too dangerous to campaign there. Three weeks ago, two French journalists, Ghislaine Dupont and Claude Verlon, were killed in Kidal, in an attack claimed by al-Qaeda in the Islamic Maghreb.

On Thursday, the northern city of Gao came under rocket attack. The resurgence in violence since the presidential election in August suggests Islamists and Tuareg secessionists still have the upper hand in pockets of the country, our correspondent says. France still has more than 3,000 troops in Mali, where there is also a force of United Nations peacekeepers. Mali’s crisis began early in 2012 when secessionist Tuareg rebels, acting in alliance with Islamist groups linked to al-Qaeda, swept across the north of the country, forcing 500,000 people to flee their homes. In March 2012, President Amadou Toumani Toure was ousted in a coup, ostensibly staged by junior officers in protest at the army’s lack of resources to fight the rebels.

The rebels then intensified their campaign and controlled two thirds of Mali by January 2013 when France sent 4,500 troops to oust them. The government of Mali and separatist rebels signed a peace agreement in June, paving the way for presidential and parliamentary elections.