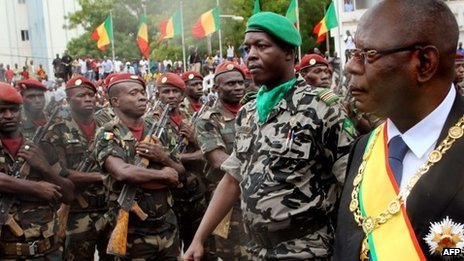 Ibrahim Boubacar Keita has been sworn in as Mali’s new president at the Supreme Court in the capital, Bamako.

Before he took his oath of office, transitional leader Dioncounda Traore handed over power at a ceremony inside the presidential palace.

The election of the new president is intended to restore normality after a coup and French-led military action against Islamist rebels in the north.

France sent more than 4,000 troops to Mali in January and together with West African troops regained control of towns and cities from groups aligned with al-Qaeda.

They captured territory with the backing of Tuareg separatists in 2012, taking advantage of a coup in Bamako during which the army accused the civilian government of not doing enough to repel the Islamists.

Mr Traore and defeated presidential candidate Soumaila Cisse were among the more than 1,000 politicians, diplomats and military personnel at Wednesday’s inauguration, the AFP news agency reports.

“I will not forget for a moment that you put me where I am to take care of all aspects of the life of our nation,” Mr Keita said after taking his oath of office.

The 68-year-old also reiterated that national reconciliation was his priority.

“I want to reconcile hearts and minds, restore true brotherhood between us so that all the different people can play their part harmoniously in the national symphony,” he said. 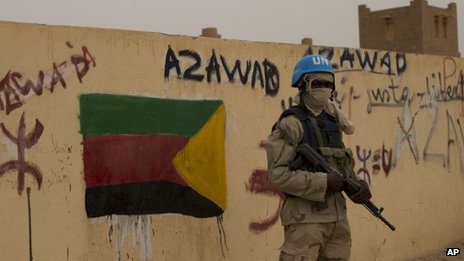 UN peacekeepers are deployed in the north of Mali

A larger inauguration ceremony, to which French President Francois Hollande has been invited, will be held later this month.

At his last cabinet meeting on Monday, Mr Traore had said that his team had able to meet a “crazy challenge” following last year’s coup, including regaining territory from Islamist rebels with France’s help and organising a peaceful presidential election. 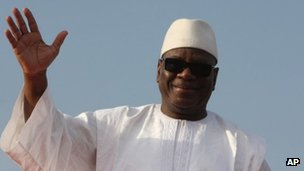 One of the first tasks for Mr Keita, often known as “IBK”, will be to open peace talks with Tuareg separatist groups.

After France’s military intervention, the separatists captured Kidal, the only town in Mali where the Tuaregs form a majority. But they agreed in June to allow nationwide elections to go ahead as long as negotiations continued within two months of a new president taking office.

Abdourahmane Dia, from BBC Afrique, says other urgent matters for the president will be reforming the army and tackling corruption – one of his campaign promises.

Many Malians believe corruption to be endemic among high-ranking officers and politicians, he says.

The crisis of the last 18 months has deepened the economic difficulties in Mali and sectors like cotton production as well as tourism have been hit hard, our correspondent adds.

But the president will have more than $4bn (£2.6bn) in foreign aid promised to rebuild the country following the return to democratic rule.

A 12,600-strong United Nations peace force is currently deploying to the West African nation, as France begins to withdraw its 3,000 remaining troops.