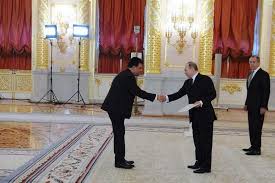 He expressed satisfaction with the current level of bilateral relations, and suggested that further steps were necessary to deepen Russia-Mauritius cooperation especially in trade, economic and tourism areas.

Moscow will host the next presentation of the investment and economic potential of Mauritius on the 19th of September, after that, from November 19th to 23rd Mauritius will host the 2nd Mauritius-Russian Investment Forum.

An important basis for the economy of Mauritius is the development of tourism, he said, and acknowledged further that “a special role in establishing and strengthening mutually beneficial bilateral contacts is played by business associations and chambers of commerce and industry.”

He pointed to the fact that strengthening ties with Russia is an important factor for the country’s further development and the trade relations between Mauritius and Russia have great potential. Mauritius is a direct gateway to the markets of Africa, India and China; therefore, Russian business can use this opportunity to establish business ties. Russian investors will find a very comfortable business climate for doing business in Mauritius.

The tourism assets are its main strength backed by well-designed and run hotels, reliable and operational services, and infrastructure. The Ambassador described the ocean economy as the next driver of growth, transforming the small island state into a 1.9 sq. km into an Ocean State.