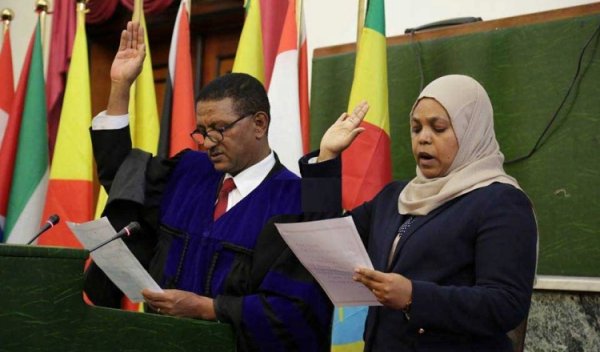 Ethiopia’s House of People’s Representative has a new Speaker Muferiat Kamil. Ms. Kamil who was the country’s former Minister of Women Affairs, was named the new speaker, replacing Abadula Gemeda who has been in the role since 2010.

Her party produced the immediate past Prime Minister Hailemariam Desalegn who resigned in February according to him, to allow the government to pursue democratic reforms.

Desalegn was replaced by Abiy Ahmed, the first ethnic Oromo to become PM. Abiy on Thursday announced a cabinet reshuffle of 29 ministers. Ten of them being new entrants, six reassigned portfolios.

Incidentally, one of the biggest issues raised by legislators during Abiy’s presentation of his cabinet was the absence of women on the list. He promised that more women will be named in a subsequent list.

In 2008, Muferiat Kamil, the new speaker became Minister of Women’s Affairs at the age of 32, at the time, the youngest appointee of the late Meles Zenawi.

She was born in Jimma, the largest city in south-western Ethiopia. She Graduated from Haramaya University with BSc. degree in Agriculture in 2000.

She held different women affairs roles and from 2002 till her appointment as Public Relations Advisor to the Southern Nations, Nationalities, and Peoples’ Region (SNNPR) President in 2007.

She has worked at the EPRDF office in Addis Ababa in April 2008, then as a junior public relations officer till her appointment as Minister of Women’s Affairs.