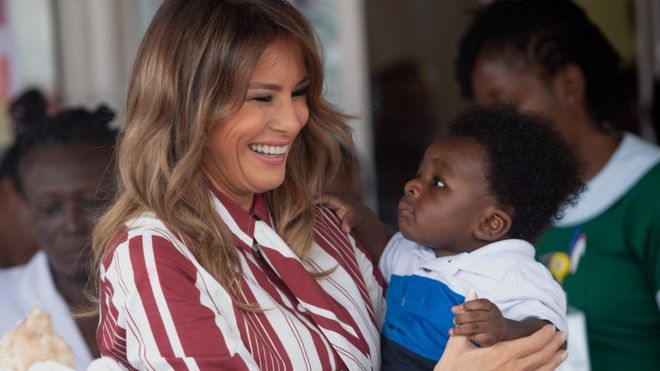 At the Greater Accra Regional Hospital at Ridge, the US first lady saw how babies are weighed – in sacks hung from a hook on a scale. She also saw how vitamins are administered to babies and toured a neonatal intensive care unit.

A spokeswoman for Mrs. Trump said the first ladies exchanged gifts: a White House tray in a signed leather case for Akufo-Addo and Kente cloth and traditional artifacts for Mrs. Trump.

The first ladies met privately at Ghana’s presidential palace, the Jubilee House after meeting for the first time at the United Nations General Assembly meeting in New York last week. Mrs. Trump is on a five-day tour with planned stops in Malawi, Kenya and Egypt.

USAID Administrator Mark Green, who will accompany the first lady in Ghana, said the trip serves to “symbolize American values and engagement. It spotlights and raises the profile of American programs in action.” And he said Trump’s focus on children drew her to the region. “She had genuine interest in youth,” he said.

Stephanie Grisham, the first lady’s spokeswoman, said the trip is consistent with first lady’s platform and Trump administration policy, noting that the president has said, “The U.S. is the world’s largest giver of foreign aid.”

“Africa remains a priority for this administration, and I believe the first lady’s trip through the continent will showcase just that,” she said.