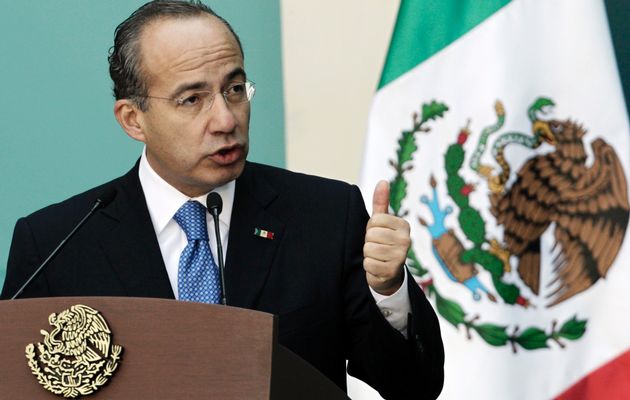 Mexican ex-president Felipe Calderon has recently compared US Republican presidential hopeful Donald Trump to Adolf Hitler and blasting him as a racist.
Calderon, a member of the conservative National Action Party (PAN), warned that Trump’s rise in the Republican Party presidential primaries was fuelling anti-Americanism around the world.
Fellow conservative Trump’s anti-migrant rhetoric is not aimed at all immigrants, but rather “he is talking about migrants that have a different colour than him — and that is frankly racist,” said Calderon, speaking after an event in downtown Mexico City.
Trump is exploiting the social fears “that in his time Hitler himself did,” Calderon told reporters.
He warned that Trump “is turning the United States into a neighbour that we’re all going to end up rejecting and hating,” and that was not in the best interest of the United States.
Mexico is the third most important US trade partner after Canada and China, and the neighbours share a 3,145-kilometer border.
Trump angered Mexico by declaring that the country was sending rapists and murderers across the border, and that he would force Mexico to pay for a giant wall to keep illegal migrants out.
Earlier in the month, Calderon — who served as president from 2006 to 2012 — dismissed the idea of building a border wall as “stupid.”
Another conservative Mexican ex-president, Vicente Fox (2000-2005), said that Trump was “crazy” and recently the US television network Fusion: “I am not going to pay for that fucking wall.”
US Vice President Joe Biden, speaking Thursday during a visit to Mexico, said the message expressed about Mexicans by some candidates in the US election campaign is “dangerous, damaging and incredibly ill-advised,” but that this episode of “xenophobia” will pass.
President Enrique Pena Nieto’s administration has called Trump’s comments about Mexicans “prejudiced and absurd.”