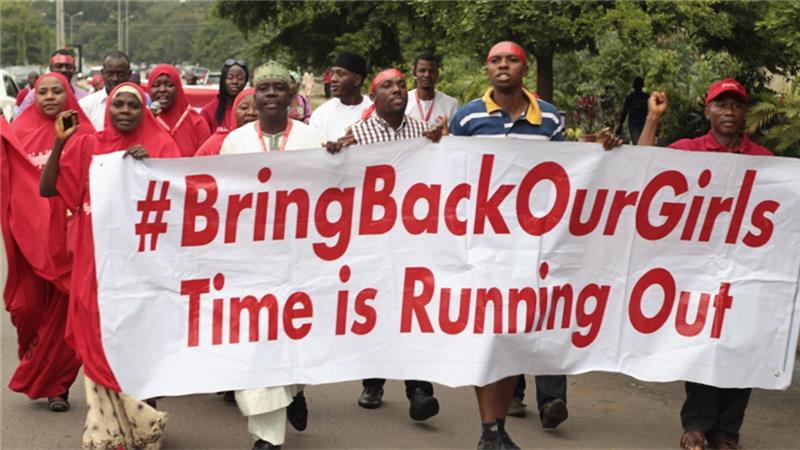 Ceremonies are to be staged around the world to mark one year since more than 200 girls were abducted by Nigerian militant Islamist group Boko Haram.

A procession will be held in the capital, Abuja, with 219 girls taking part to represent each missing girl.

The abduction of the girls in Chibok in north-eastern Nigeria sparked global outrage, with nations such as the US and China promising to help find them.

There have been reported sightings of the girls, but none has been found.

Boko Haram say the girls have converted to Islam and been married off. One witness told the BBC that she saw more than 50 of them alive three weeks ago in the north-eastern town of Gwoza

It has been a whole year of agony for the relatives of the missing 219 Chibok girls. There have been a few sightings of some of the abducted students but very little official information from a government that has long promised to rescue them from the clutches of Boko Haram.

One mother told the BBC she sometimes arranges her 19-year-old daughter’s clothes in the hope that she is about to return home.

The scale of this conflict is so grim that the Chibok girls represent just a fraction of those seized by the jihadists. Many have escaped partly thanks to a recent military offensive – but not the Chibok girls.

High-profile figures such as Nobel Peace Prize winner Malala Yousafzai and US First Lady Michelle Obama were among those who drew attention to their plight on Twitter last year under the #BringBackOurGirls hashtag.

Since then, campaigners have criticised the Nigerian government of outgoing President Goodluck Jonathan for not doing enough to find the girls and combat the six-year Boko Haram insurgency in the north, in which thousands of

Mr Jonathan suggested to the BBC’s Newsday that political rivalries had hampered the federal government’s ability to grasp the scale of the Chibok attack and respond to it, as the government of Borno state, a Boko Haram stronghold, was run by an opposition party.

“There is more politics involved than concern for the girls,” he said.

And Amnesty International say the militants have abducted 2,000 girls and women since the start of last year, becoming cooks, sex slaves and fighters.

Nigeria’s incoming president, Muhammadu Buhari, has promised to “crush” the insurgents and said his government would “do everything in its power to bring them home”.

However, he added: “As much as I wish to, I cannot promise that we can find them.”