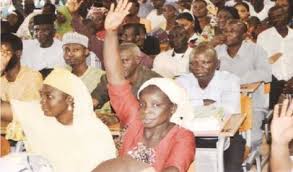 The Niger State Government has recently said that it is set to collaborate with the Cambridge University in UK in the area of teacher training.
Hajiya Fatima Madugu, the State’s Commissioner for Education, Science and Technology in an interview, said that the idea was conceived to complement the government efforts to improve education service delivery to the people.
“Niger State will be partnering with the Cambridge University in Britain to transform the state’s education sector, so as to enable us to be where we want to be. The first phase will involve a baseline survey, where the number of pupils and teachers as well as number of schools in the state will be captured, in order to know their needs in those schools and address them”.
She also stated that the second stage has to do with training and retraining of teachers so that they will be able to use modern teaching technologies in teaching pupils and students, while the last stage is the collaboration with donor agencies for the success of this noble project; adding that the partnership will run for three years.
Meanwhile, Kassim Alfa, the Chairman of Niger State House of Assembly’s Committee on Education, Science and Technology, has pledged the committee’s support for efforts to revamp the education sector.
He said that members of the committee strongly believed in education as the greatest tool for addressing the myriad social and economic challenges facing the society.