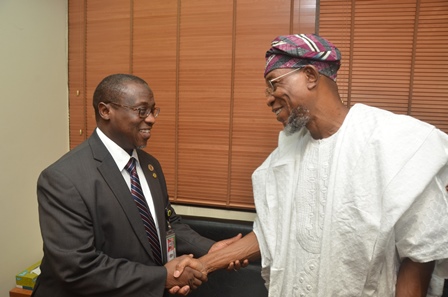 The Nigerian National Petroleum Corporation (NNPC) is on a rigorous effort to establish more retail stations nationwide in order to ensure steady supply and distribution of petroleum products in the country.

This information was revealed by the NNPC Group Managing Director, Dr. Maikanti Baru, while speaking with the Governor of Osun State, Rauf Aregbesola during his visit to the NNPC Towers at the country’s Capital-Abuja, recently.

Based on the foregoing, the duo held talks on collaboration over establishing a state-of-the-art retail filling station in Osun State that would improve the supply and distribution of petroleum products in the State and its environs.

Dr. Baru also announced that the Osun State government has completed a modern 26 nozzle retail station and is planning to lease it out to the corporation.

“Our strategy for the NNPC Retail is to capture as much of the downstream retail market in the country as possible. A state like Osun is very central to our expansion drive. Having looked at the possibilities, we are committed to taking the discussions further.”

“We have reached an advanced stage in our discussions. Next week, we are expected to further discussions on commercial terms of offer with the state Government’s team,” Baru added.

According to Dr. Baru the corporation has been on the Osun State support list over the years, in terms of hosting the corporation’s System 2B pipeline segments connecting Mosimi Depot with Ibadan, Ore and Ilorin depots.

“I am happy to inform you that over the years, we hardly record any incident of pipeline vandalism or security breach along our System 2B pipeline network that cuts across Osun State. This is attributable to the efforts of the State Government and the law-abiding people of the state,” he added.

He also appreciated the efforts of the Governor who was diligent in managing the recent fuel challenges having appointed a Special State Taskforce who were in charge of monitoring fuel distribution within and across the state, a move that cushioned the effects of the hiccups on Nigerians.

In responds to the GMD, Governor Aregbesola said he was in the NNPC to commend the corporation for its interest in driving development in Osun State.

“We are here to discuss collaboration on fuel distribution and possible opportunities where NNPC can invest in my state. We are progressing with the talks on the mega station and we are satisfied with the discussions so far,” Governor Aregbesola stated.