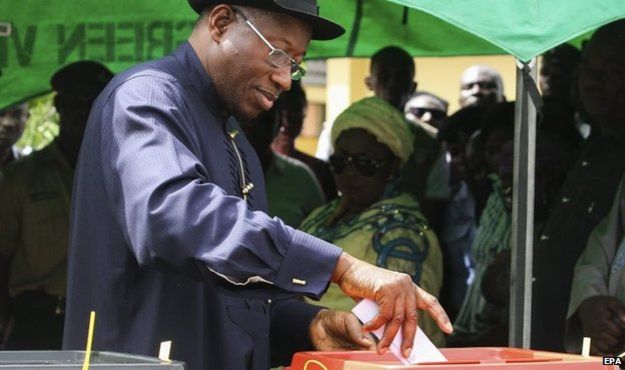 The delays were “not widespread” but were still “a matter of concern”, an election official told the BBC.

More than 20 people have reportedly been killed in various attacks by unknown gunmen.

Mr Jonathan is facing a strong challenge from Muhammadu Buhari.

The election is said to be the most closely fought since independence.

It was postponed from mid-February to allow the army time to recapture territory from the Islamist militants of Boko Haram.

The two main candidates had pledged to prevent violence during and in the aftermath of the elections.

But several hours after voting started, reports came in of violent incidents at polling stations in which at least 24 were reported to have been killed.

Other booths experienced technical glitches, leading to voting being extended to Sunday at “about 300 polling units out of about 150,000”, a spokesman for the Independent National Electoral Commission (Inec) said.

At polling stations where voting was closed, officials began counting votes – with blackouts forcing some to use torches or car lights.

So who will win? I don’t mean Goodluck Jonathan or Muhammadu Buhari. I’m talking about the forces of democracy here versus the assortment of groups busy trying to undermine this still-too-close-to-call election.

On Saturday we saw militant attacks, election officials abducted, stolen ballot boxes, a suspicious number of delays at some polling stations, and – although this may be more chaos than conspiracy – serious doubts raised about the efficacy of new voter registration machines.

In many countries all that might seem an overwhelming combination of negatives. But the positives should not be overlooked.

We’ve seen the impressive patience, discipline – and in the troubled north-east, pure courage – shown by most voters. Then there’s the increasingly sophisticated coalition of election observers, armed with cameras and social media, furiously publishing data and hunting for irregularities.

Those positives may not be enough to guarantee this election is free and fair. But there’s some reason for optimism. Whether the loser accepts defeat is, unfortunately, a rather different question.

Millions of Nigerians turned out to vote, despite threats from Boko Haram to disrupt the poll.

“We have suffered enough, fled our homes after many attacks,” said Roda Umar, a housewife from the former militant headquarters of Gwoza. “I’m ready to endure the pain to vote.”

Voters are also electing members of the house of representatives and the senate.

Voters need to register using biometric cards with their fingerprints before they can cast their vote.

The Inec said the accreditation process had “gone on well in several places”, but was “slow” or had “not commenced at all” in others. Many stations experienced problems with card readers.

President Jonathan tried for some 50 minutes to register in his home village of Otuoke, before coming back a second time. When the electronic registration failed again, he had to be accredited manually before casting his ballot paper.

Gen Buhari did not have any problems registering in his hometown, Daura.

After voting, he told the BBC the process was “in order but I have been watching activities in other states, which is disappointing, but overall it’s on course”.

Nigeria at a glance:

Attacks were reported in north-eastern Gombe state, including incidents where gunmen opened fire on voters at polling stations.

It is unclear whether the attacks were the work of Boko Haram militants or political thugs.

However, Mr Jonathan told the BBC’s Peter Okwoche that most of the violence in Gombe was not directly related to the elections.

“The war against terrorists is going on, voting or no voting,” he said. “There was a conflict, kind of a crossfire, between soldiers and terrorists that had nothing to do with the elections.”

The People’s Democratic Party (PDP) has dominated Nigerian politics since 1999, but Gen Buhari’s All Progressives Congress (APC) is viewed as a serious challenge.

Some 800 people were killed after the 2011 contest between Mr Jonathan and Gen Buhari, a former military ruler, who alleged fraud.