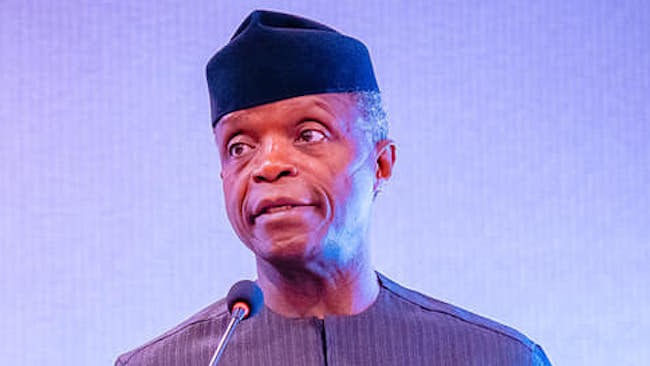 If Nigerians are to enjoy the recommended 1000 kilowatts hours per year, the country must attract at least 400 billion dollars by 2025.

This is according to Vice President, Yemi Osinbajo, who was speaking at a climate finance session where he revealed what Nigeria needs to do in terms of power infrastructure for transmission and distribution.

Mr Osinbajo also called for fair and equitable treatment of African countries whose priorities must be taken as seriously as Europe and the rest of the world. He added that climate justice must include greater support for countries with greater needs.

“We are already seeing the investment rules limit the technology choices of African countries in ways that do not apply to wealthy nations. Applying a set of standards to Africa that you can’t apply in your own country is the opposite of climate justice,” he said.

He also added, “Nigeria will require considerable investments in new infrastructure. We’re going to build more roads, ports, industrial parks, and especially power systems. For every Nigerian to consume the Modern Energy Minimum of 1,000-kilowatt-hours per year by 2050 would require a 15-fold increase in our national power generation.

“It must include investments to mitigate carbon emissions and ensure that developing countries can adapt to the impacts of climate change caused by the rich polluting nations. Climate justice must include ending energy poverty. Anything else would be the opposite of justice.”