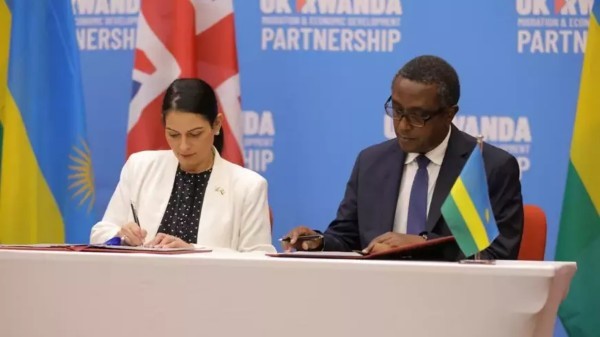 Britain could send tens of thousands of asylum seekers to the East African country of Rwanda, Prime Minister Boris Johnson said on Thursday, aiming to break people-smuggling networks and stem the flow of migrants across the Channel.

Concerns over immigration were a big factor in the 2016 Brexit vote, and Johnson has been under pressure to deliver on his promise to “take back control” of Britain’s borders. But his plan drew swift criticism from opponents of his Conservative Party and charities.

“We must ensure that the only route to asylum in the UK is a safe and legal one,” Johnson said in a speech in Kent, southeast England, where thousands of migrants in small boats landed on Channel beaches last year.

“Those who try to jump the queue or abuse our systems will find no automatic path to set them up in our country, but rather be swiftly and humanely removed to a safe third country or their country of origin.”

Anyone who has arrived in Britain illegally since Jan. 1 could now be relocated to Rwanda, which would disrupt the business model of people-smuggling gangs, the prime minister said.

“The deal we have done is uncapped, and Rwanda will have the capacity to resettle tens of thousands of people in the years ahead,” he said.

“People fleeing war, conflict, and persecution deserve compassion and empathy. They should not be traded like commodities and transferred abroad for processing,” said UNHCR’s Assistant High Commissioner for Protection, Gillian Triggs.

Johnson said Rwanda, wherein 1994 Hutu extremists killed more than 800,000 Tutsis and moderate Hutus, was “one of the safest countries in the world”, adding that the risk of ending up in the country would prove a “considerable deterrent” over time.

Human Rights Watch said Rwanda did not respect some of the most fundamental human rights.

“Refugees have been abused in Rwanda, and the government has, at times, kidnapped Rwandan refugees outside the country to bring them home to face trial and ill-treatment,” said Lewis Mudge, HRW’s Central Africa director.

Patel signed the partnership agreement in Kigali on Thursday, and she presented it at a joint news conference with Rwandan Foreign Minister Vincent Biruta.

Biruta said Rwanda’s recent history had given it “a deep connection to the plight of those seeking safety and opportunity in a new land”. He added that Rwanda has already accepted almost 130,000 refugees from numerous countries, including the Democratic Republic of Congo, Burundi, Afghanistan, and Libya.

The migrants will be housed temporarily in facilities, generally hostels or hotels, in Kigali while their asylum claims are looked into, Rwandan government spokeswoman Yolande Makolo told Reuters. “Once their claims are determined, they will be facilitated to integrate into the community,” she said.

Rwandan opposition leader Victoire Ingabire said the country was hospitable, but it should first solve its internal problems.

Johnson said the plan would face legal challenges but said the partnership was “fully compliant” with international legal obligations. The British government would contribute an initial 120 million pounds ($158 million).

A minister in Johnson’s government said the plan was focused on single young men. “This is about male economic migrants in the main,” Secretary of State for Wales Simon Hart told Sky News. “There is a different set of issues with women and children.”

Opposition lawmakers said Johnson was trying to distract from the renewed calls on him to resign after being fined by police on Tuesday for attending a gathering for his birthday in June 2020 when social mixing was all but banned under COVID-19 rules the government had introduced.

Last year, more than 28,000 migrants and refugees made the crossing from mainland Europe to Britain. The arrival of migrants on rickety boats has been a source of tension between France and Britain, especially after 27 migrants drowned when their dinghy deflated in November.

“Around 600 came across the Channel yesterday. This could again reach a thousand a day in just a few weeks,” Johnson said.

He said the new approach would see the Royal Navy take over operational command from Border Force in the Channel, and Greek-style accommodation centres would open in Britain.

The head of a refugee advocacy group said the plan violated the principle of granting asylum seekers a fair hearing on British soil.

“I think it’s rather extraordinary that the government is obsessing with control instead of focusing on competence and compassion,” Enver Solomon, chief executive of the Refugee Council, told BBC radio.