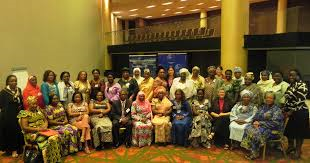 The US Consul General, Mr. John Bray has recently described his country’s bilateral relationship with Nigeria as mutually benefitting, saying that he would want Nigerian women to consider playing a more active role in politics.
Bray who spoke at the event marking Women’s History Month at the Public Affairs Section (PAS) of the US consulate, Lagos, said that the US government and the American people support this vision through demonstrated actions, and in preparation for the elections coming up in 2019, he would like to throw out a challenge to women, as well as to others participating through social media, to consider playing a more active role in politics by lobbying to have laws passed, or changed, that will eliminate barriers to women’s full inclusion and empowerment in all aspects of Nigerian society.
He told the forum that women’s leadership and meaningful participation in government, the economy, and civil society accelerates economic development, improves health and educational indicators, advances democratic development, and fosters peace and security, adding that “More broadly, the United States has invested millions of dollars to directly advance gender equality across Sub-Saharan and North African countries.
The event with the theme, ‘Women in Leadership and Good Governance’ encourages activities to promote political and economic opportunities for women, access to health and education services, and efforts to prevent and respond to gender-based violence.
According to the Consul General, the Unites States is consistently looking at ways to understand better and take action to promote women’s equal participation. “This May, the White House will host a summit on ‘The United State of Women,’ to highlight the advances we have made in the United States and across the globe and to expand our efforts on helping women confront the challenges they face and reach for their highest aspirations.”
“To mitigate lack of inclusion, the United States launched the Equal Futures Partnership in 2012 to help galvanize efforts by governments around the world to address barriers to women’s economic and political participation”, “Equal Futures Partnership in Africa include Benin, Senegal, Sierra Leone, and Tanzania among many other countries in other regions of the world. Unfortunately, Nigeria is not part of the Equal Futures Partnership but you have an opportunity to lobby for inclusion”, the CG said.
He further stated that “In Nigeria, the level of enthusiasm that I have seen by Nigerian women and their aspirations for political participation, their call for government accountability and transparency, and their desire to contribute to national development is impressive