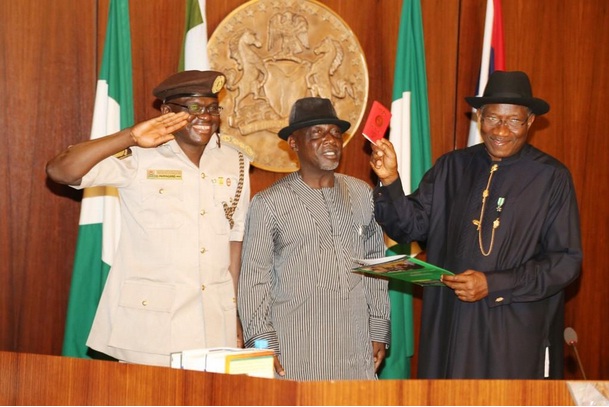 PRESIDENT Goodluck Jonathan has challenged officers and men of the Nigeria Immigration Service (NIS), especially those at the entry out into Nigeria to work towards projecting the country in a positive light by conducting themselves in a more professional manner.

The President believed such had become imperative when taken into account the fact they ate the first contacts any foreigners make as they enter the country, noting that any negative conductive conducts by the Service would leave a permanent impression on them.

The introduction of the 64-page Nigerian e-passport, according to the Minister of Interior, Comrade Abba Moro, was a demand-driven initiative to meet the needs of frequent Nigerian travellers. ‎ The rationale behind the reform was to enhance the integrity of Nigerian travel documents and the image of the Nigerian traveller anywhere in the world.

According to him, the idea was based on some recommendations arising from the operational experiences of the Nigeria Immigration Service, the Ministry of Interior recently approved some reforms concerning the Nigerian e-Passport, including the newly introduced 64-page.

Stressing the need for integrity for Nigerian pastors and other travels documents, the President said he had always been inundated with reports of misconducts, especially in the delay of issuance of travels passports, hoping that with the introduction of the new passports, the process would be greatly enhanced.

His words, “One thing one must know today is that it is not the issue of 64-page passport that is key to Nigerians but the security. If our passport could be easily faked by criminals, then we will have problems. One thing again is that how can Nigerians are able to get passport easily especially those living outside this country.

“When I travel there is this complaints about how to get the Nigerian passport not necessarily the issue of 64-page passport but how do they get passport so the ministry must look into this.”

Besides, he said what affects every traveller is how efficient and committed immigration officers work at the country’s airports, noting that visitors that come into the country have different impressions about Nigerian immigration officers. “So, they must improve, because they are the image of this country, how they handle visitors matters so much, if they conduct themselves poorly, it reflects on all of us, so their conduct at the airports are key besides the passport.

“The issue of the image of the country is what we will all work for, both people in government, the media and civil society and I always say that when people continue to paint their country with all kinds of colours, that is the way they will associate those colours with your green passport.”

The President said he sympathizes with those who travel almost on a weekly basis because changing passport on a monthly was not an easy task, but expressed consolation that with the launch, Nigeria had moved a step forward. “The key thing is for us to have a robust relationship with key countries so that some of these frequent travelers may not need visas, that will really help us more.”

Both Moro and the Comptroller-General of NIS, David Paradang said the ease with which Nigerians at home and in the Diaspora could obtain their Nigerian Passports, across several issuing centers in Nigeria and in 27 Missions abroad as well as through the on-going e-Passport Intervention Exercise, was a clear demonstration of government’s deliberate commitment towards entrenching seamless service delivery to Nigerians wherever they are found.

Appropriate strategies are being put in place to sensitize members of the public on the new e-passport reforms to enable full implementation after this official launch by Mr. President, Paradang said.