The Liberian Minister of National Defence, Honourable Brownie J Samukai Jr has recently described the Nigerian Armed Forces as very professional and outstanding, adding that he would continue to appreciate them for the training support they have been giving to his home country since 2006.
The minister made this remark when he visited Nigeria’s Chief of the Defence Staff, General Abayomi Gabriel Olonisakin in his office at the Defence Headquarters in Abuja.
The minister further stated that Liberia would forever regard Nigeria as a big brother for the role it played in the restoration of peace, democratic governance and security in their country. He said the reorganized military they have is a product of the Nigerian Armed Forces.
Samukai Jr who in the company of his country’s Ambassador to Nigeria solicited more support from the Nigerian Armed Forces in the areas of training and vacancies for courses and cooperation for enhancing bilateral defence cooperation between the two countries said that his government would stand shoulder to shoulder with Nigeria in ensuring that terrorist activities are effectively stamped out in Nigeria.
He therefore, stated his country’s readiness to support in whatever way to rout out terrorism in Nigeria and Africa as a whole.
Responding, the CDS thanked the minister for the visit and assured him that the two countries would continue to partner in order to be able to contribute in the development of the two countries and the sub-region in general.
He also pleaded that the Nigerian Armed Forces would continue to render training support to the Armed Forces of Liberia in order to ensure collective security to the sub-region and the world at large.
Dignitaries present at the visit included, the Liberian ambassador and all the principal staff officers of the Defence Headquarters. 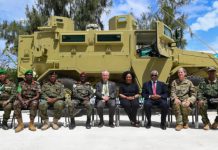 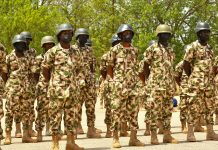 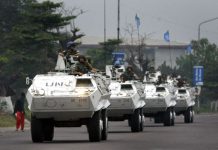