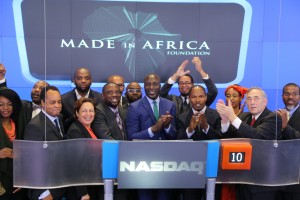 The African Development Bank (AfDB) and Made in Africa Foundation (MIAF), which was co-founded by Nigerian billionaire Kola Aluko, and Ghanaian-born fashion designer, Ozwald Boateng, have launched a $500 million fund to co-manage and market initiatives to attract new infrastructural investment for the continent.

The launch which took place at the NASDAQ in New York yesterday, was attended by Hollywood actor Jamie Foxx, Head of Infrastructure Finance for the African Development Bank Tas Anvaripour, Quintin Primo III who is the Chairman of the fund’s financial partners, Capri Capital, and MIAF CEO Chris Cleverly.

The fund represents the project development unit of Africa50 – Africa’s largest infrastructure development vehicle created to date – and plans to secure the $500 million by the first half of 2014 with $250 million raised so far.

Co-Founder of MIAF Ozwald Boateng, while commenting on the launch, said: “Africa is moving fast: 7 out of 10 of the world’s fastest economies are in Africa. But the tragedy of the African continent is we export our wealth. Intra-Africa trade, if you look at the sub-Saharan region, is a mere 7 per cent, so as Africans we do not trade amongst ourselves. If you compare the intra-European trade, it’s an excess of 70 per cent, intra-Asia trade is an excess of 55 per cent.

“Clearly as Africans to compete we need the roads and rail, telecommunications and urban environments that stimulate and ensure trade.

Quintin E. Primo III added: “Capri Global Capital, along with the AfDB, MIA and Kola Aluko, believe that the promise of Africa is now. The extraordinary growth potential of the continent cannot be truly unlocked until critical infrastructure investments are conceived, championed and delivered. But these projects must not be charity. Rather, they must be commercially viable projects in which investors can responsibly invest. And ideally, they should not only be high impact, but offer attractive risk-adjusted returns.”

The American movie sensation Jamie Foxx was excited about the project and expressed his views: “This is a great project and i’m delighted to be here to support it. Everyone has worked so hard to get this off the grounds and I hope it marks the start of something big for the continent.”