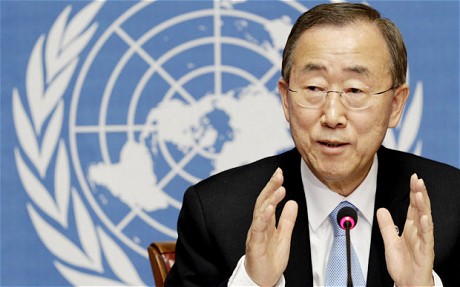 Warning that “we cannot accept a rising tide that floats only some boats and leaves many to drown”, the United Nations Secretary-General Ban Ki-moon, today called on business leaders to do even more in conjunction with the United Nations to promote sustainable development worldwide.

“That is where you come in,” he told over a thousand corporate executives attending the UN Global Compact Leaders Summit in New York, stressing the need for all actors to work together to pursue a sustainable path that links economic growth, social justice and environmental stewardship. “My appeal to you is to act for the common good – and to get others to join you. This is the morally correct thing to do. And it is the smart choice, too.”

The UN Global Compact, set up in 2000, is the world’s largest corporate sustainability initiative, with the participation of 8,000 companies and 4,000 civil society organizations from 145 countries seeking to link business engagement with global priorities, including poverty and disease eradication, climate change mitigation, women’s empowerment, children’s and labour rights, and fighting corruption.

“The sustainable journey that we all need to take is in everybody’s best interest – even if it may sometimes demand short-term sacrifice,” Mr. Ban told the summit, which is expected to endorse a new global architecture for the corporate role in sustainable development in the years following the end in 2015 of the current cycle based on the Millennium Development Goals (MDGs), the eight anti-poverty targets agreed by world leaders at a UN summit in 2000.

These set specific goals for slashing extreme poverty and hunger, ensuring access to universal health care and education, achieving gender equality, cutting maternal and child mortality, securing environmental stability, reducing HIV/AIDS and forging a global partnership for development, all by the end of 2015.

“Nobody can benefit from catastrophic climate change or rampant unemployment and the social unrest that comes with it,” Mr. Ban said. “Prosperous, stable societies and a healthy planet are the bedrock of political stability, economic growth and flourishing new markets.”

He stressed that companies that take their responsibilities to people and the planet seriously will increasingly be in the vanguard, noting that more than ever, corporate executives see a direct link between sustainability and the bottom line, and called on business leaders to play a leading role in countering climate change through sustainable energy and job-rich low-carbon growth.

“Great advances towards eradicating poverty and disease point to what can be achieved when we work together,” he declared. “But I want you to go further. First, I want you to see what more you can or should be doing in your own operations and in your relationships with trading partners. Second, I want you to act on your commitment by helping to swell the ranks of the Global Compact so we reach a critical mass.”

Mr. Ban laid before the summit the Compact’s report on ‘Building a Business Engagement Architecture for the Post-2015 Agenda,’ which seeks to scale up corporate actions to directly advance UN goals and calls on corporate leaders to work together on an entirely new scale by collaborating and co-investing to share risks and realize opportunities.

“Your support is essential,” Mr. Ban declared. “Today, I ask you to be architects of better world. What was once a call to the founding members of the United Nations is now a rallying cry to business and civil society leaders everywhere.”