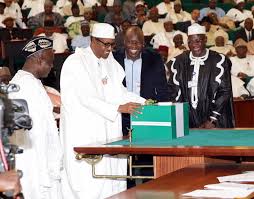 Nigeria’s parliament has recently approved record spending for 2016 in a budget that gave few clues about how Africa’s top oil producer can find the money with energy prices still struggling to recover.
President Muhammadu Buhari, elected a year ago to fix an oil-producing economy, presented a record $30 billion budget in December to invest in roads, power supply and diversify away from oil.
He had to withdraw it a month later after a further drop in oil prices.
The new budget is based on an oil price of $38 a barrel and crude production of 2.2 million barrels a day, in line with current output.
It aims to recharge the economy by trebling capital spending compared with 2015’s plan. A deepening crisis slowed gross domestic product growth to 2.8 percent in 2015, it’s weakest in decades.
“Although Nigeria has a low debt-to-GDP ratio… the authorities will be under pressure to demonstrate rapid progress in raising revenue,” said Razia Khan, chief economist, Africa at Standard Chartered bank.
“Given the weak economic outlook, this will not be easy,” she said, adding that debt service was making up 24 percent of the budget, compared with an estimated 22.4 percent in December.
The central bank raised its benchmark interest rate to 12 percent from 11 percent in a surprise move, just four months after a rate cut, seeking to curb inflation which hit a three-year high of 11.4 percent in February.