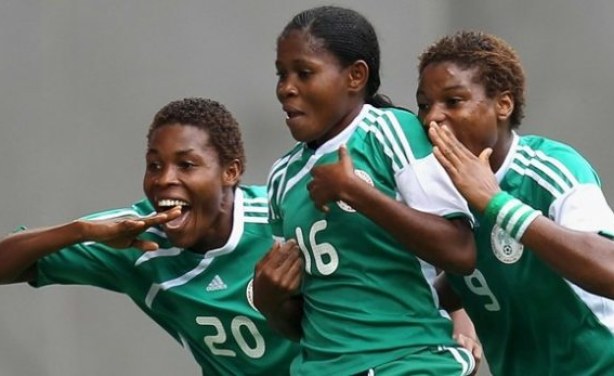 Four goals from Rivers Angels forward, Asisat Oshoala, with one each from Courtney Dike and Uchechi Sunday saw the Falconets make it to the final of the FIFA U20 Women World Cup for the second time in three editions as they beat North Korea 6-2.

They will play Germany who beat France 2-1 to set up a repeat of 2010 final where the Germans denied Nigeria the trophy.
The Falconets started brightly as Dike set up by Oshoala scored an early goal in the second minute to set the pace for the team.
Though the Koreans dominated possession in the early parts of the game, it was the Nigerians who scored the goals as Oshoala got her first of the day in the 24th minute. Super sub Sunday also got her name on the score sheet a minute after she came in for Dike in the 55th minute before Oshoala unleashed three more to complete the misery of the Asians.

The Koreans also got goals in the 31st minute through Um Sim Ri and So Yon Jo converted from the penalty spot in the 62nd minute when Ugo Njoku handled the ball in the penalty area; but it was not enough to see them make it to the final round.

And when the final whistle blew to bring an exhilarating game to an end, Oshoala and her teammates celebrated knowing they had only one match to play to emerge champions.

Asisat was also voted Most Valuable Player of the match‎.

The Falconets will now play Germany to decide the winner of the FIFA U20 Women’s‎ World Cup.