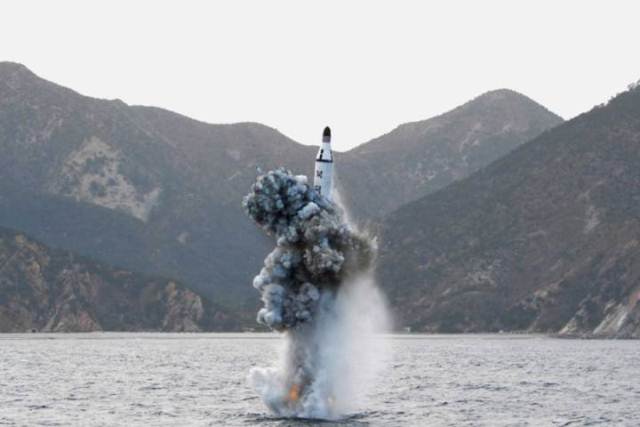 By Ju-min Park and Jack Kim

North Korea fired a submarine-launched missile on Wednesday that flew about 500 km (311 miles) towards Japan, a show of improving technological capability for the isolated country that has conducted a series of launches in defiance of UN sanctions.

Having the ability to fire a missile from a submarine could help North Korea evade a new anti-missile system planned for South Korea and pose a threat even if nuclear-armed North Korea’s land-based arsenal was destroyed, experts said.

The ballistic missile was fired at around 5:30 a.m. (2030 GMT) from near the coastal city of Sinpo, where a submarine base is located, officials at South Korea’s Joint Chiefs of Staff and the Defence Ministry told Reuters.

The missile was fired at a high angle, South Korea’s Yonhap News Agency reported, an indication that its full range would be 1,000 km (620 miles) at an ordinary trajectory. The distance indicated the North’s push to develop a submarine-launched missile system was paying off, officials and experts said.

Jeffrey Lewis of the California-based Middlebury Institute of International Studies said the test appeared to be a success.

“We don’t know the full range, but 500 km is either full range or a full range on a lofted trajectory. Either way, that missile works.”

The launch came two days after rival South Korea and the United States began annual military exercises in the South that North Korea condemns as a preparation for invasion, and has threatened retaliation.

Beijing is Pyongyang’s main ally but has joined past U.N. Security Council resolutions against the North. It has been angered by what it views as provocative moves by the United States and South Korea, including their July decision to base the THAAD (Terminal High Altitude Area Defence) anti-missile system in South Korea.

China opposes North Korea’s nuclear and missile programme as well as any words or deeds that cause tension on the Korean peninsula, its foreign minister, Wang Yi, said on Wednesday at previously scheduled meeting with his Japanese and South Korean counterparts in Tokyo.

South Korea’s Foreign Ministry condemned the launch and warned of more sanctions and isolation for its rival that “will only speed up its self-destruction.”

“This poses a grave threat to Japan’s security, and is an unforgivable act that damages regional peace and stability markedly,” Japanese Prime Minister Shinzo Abe told reporters, adding that Japan had lodged a stern protest.

North Korea has become further isolated after a January nuclear test, its fourth, and the launch of a long-range rocket in February which brought tightened UN

It has launched numerous missiles of various types this year, including one this month that landed in or near Japanese-controlled waters.

Joshua Pollack, editor of the U.S.-based Nonproliferation Review, said claiming to have mastered SLBM technology is as much about prestige as a military breakthrough, a status enjoyed only by six countries including the United States, Russia and China.

“I think it’s meant foremost as a demonstration of sheer technical capability and a demand for status and respect,” Pollack said.

South Korea believes the North has a fleet of more than 70 ageing, limited-range submarines – a mix of Chinese, Russian and locally made boats. Acquiring a fleet of submarines large and quiet enough and with a longer range would be a next step for the North, experts said.

“They keep conducting nuclear tests and SLBMs together which means they are showing they can arm SLBMs with miniaturised nuclear warheads,” said Moon Keun-sik, a retired South Korean navy officer and an expert in submarine warfare.

North Korea said this year it had miniaturised a nuclear warhead to fit on a ballistic missile but outside experts have said there is yet to be firm evidence to back up the claim.

Tensions on the Korean peninsula were exacerbated by the recent defection of North Korea’s deputy ambassador in London to South Korea, an embarrassing setback to the regime of North Korean leader Kim Jong Un.