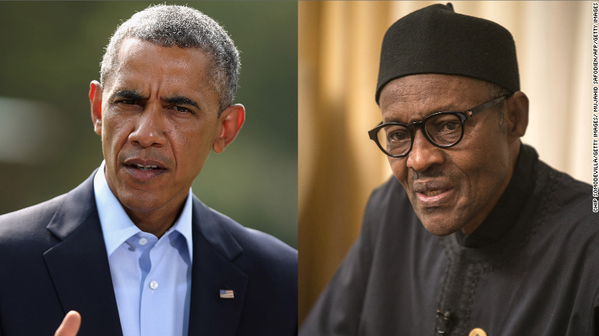 The Obama administration believes that Nigeria’s new president, Muhammadu Buhari, can become an ally in cracking down on Boko Haram. Activists are hoping that the U.S. can assist Nigeria in halting Boko Haram’s growth, especially by focusing on strengthening the country’s military

President Barack Obama will welcome Nigeria’s new president to the White House Monday in an effort to bolster the fight against Boko Haram and begin a new chapter with Africa’s most populous country.

The United States is eager to boost its ties with Nigeria now that the former president, Goodluck Jonathan, who was often a source of frustration for Washington, has left office.

The Obama administration believes that President Muhammadu Buhari can become an ally in cracking down on Boko Haram, whose collaboration with ISIS is helping the spread of radical extremism in West Africa.

Buhari, a devout Muslim in a country where a majority of residents are Muslim, said during his election that he’d fight aggressively against radical Islam and promised to ramp up the fight against Boko Haram, which has horrified the world with its kidnappings of Nigerian school girls.

The Obama administration, which had challenged Jonathan to fight terrorism more aggressively, emphasized the effort to combat Boko Haram in its announcement of Buhuri’s visit.

“President Obama looks forward to discussing with President Buhari our many shared priorities including US.-Nigeria cooperation to advance a holistic, regional approach to combating Boko Haram,” the White House said in a statement.

Omolola Adele-Oso, executive director and co-founder of Act For Accountability, a D.C.-based African government watchdog organization, believes Buhuri will prioritize fighting terrorism more than his predecessor. Shortly after being elected, the new president met with the families of the girls kidnapped by Boko Haram, she said.

“He made promises to, in the next months, address the issue of Boko Haram pledging to do more to rescue the girls,” said Adele-Oso, who is Nigerian.

The extremist group has said it has no interest in negotiating with the Nigerian government, but Buhari’s officials said this month that they are open to discussions.

“If Boko Haram opts for negotiation, the government will not be averse to it,” Femi Adesina, a Buhari spokesman, said in a statement. “The government will, however, not be negotiating from a position of weakness, but that of strength.”

Activists are hoping that the United States can assist Nigeria in halting Boko Haram’s growth, especially by focusing on strengthening the country’s military.

“The largest help the U.S. could give comes with intelligence — helping Nigeria develop and monitor and track our security issues, and develop a better understanding of what it means to control our border,” Adele-Oso said.

While Nigeria would be wise to strengthen its relationship with the United States, ultimately the solutions to the country’s problems — including divisions — will have to be solved internally, said Tukufu Zuberi, a professor at the Center for Africana Studies at the University of Pennsylvania.

“The solution to that can’t come from Obama. It has to be a Nigerian solution,” he said. “There’s not much France can do or the U.S. can do in order to provide a national consciousness and unity in Nigeria.”

In its statement, the White House also emphasize the U.S. Interest in strengthening “Nigeria’s efforts to advance important economic and political reforms that will help unlock its full potential as a regional and global leader.”

Having recently won Nigeria’s first credible elections, Buhuri enjoys the most respected status internationally of any of his predecessors. Buhuri has said he desires a closer relationship with the United States and other Western partners as he seeks to improve Nigeria’s position in the global community.

But just how thoroughly he’ll bring reform and implant democracy within Nigerian society remains a question.

Buhuri himself is a former oil minister and ran on a platform of cleaning up the rampant corruption in government and the oil sector. With a broom as one of his campaign icons, Buhuri signaled that he plans to clean house in Nigeria.

He has long opposed corruption, but his democratic credentials are less stellar: He once led a military coup against a corrupt government in 1984. He has since, however, become a vocal advocate of democracy.

Adele-Oso is optimistic about Buhari’s desire to make the country more democratic.

The United States, for now, has praised the democratic moment in Nigeria and both Jonathan and Buhuri for a peaceful transition of power.

In particular, the White House emphasized the role of the Nigerian public, noting at the time of the election in March that “the last few days have shown the world the strength of Nigeria’s commitment to democratic principles. By turning out in large numbers and sometimes waiting all day to cast their votes, Nigerians came together to decide the future of their country peacefully.”

The United States Itself helped to some extent in this process. The U.S., the United Kingdom and others in the international community warned those considering disrupting the elections that there would be serious consequences.

“With Africa’s largest economy, a burgeoning population, and significant political stature, Nigeria matters. Its fate will affect that of its neighbors, of oil companies, and of global security,” wrote foreign policy expert Sarah Chayes of the Washington-based Carnegie Endowment for International Peace.

Nigeria once had a vibrant diverse economy, but has since become an oil monoculture, according to Chayes, senior associate in Carnegie’s Democracy and Rule of Law Program. Following the corruption, terrorism and environmental concerns, multiple countries and businesses have divested from Nigeria’s oil industry.

“There was nothing foreordained in this outcome, and it can be reversed. It is in the interests of energy companies as well as the United States and other Western governments to help Nigeria’s new leadership do so,” wrote Chayes.