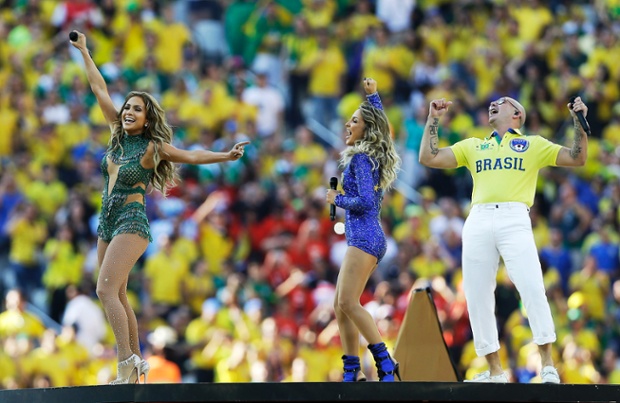 With all of the issues and questions leading up to the World Cup, the new Arena de Sao Paulo — also known as Corinthians Arena — shined under blue skies as Brazil kicked off its home World Cup with a football-style carnival.

The soccer-crazed country hoped Thursday’s Croatia-Brazil opener would just be the start of a run to extend its record to six World Cup wins.

Although traffic and transit strikes have plagued the sprawling Sao Paulo area in recent weeks, thousands made it into the stadium in plenty of time to party.

Jennifer Lopez, rapper Pitbull and pop star Claudia Leitte bounced around a giant stage resembling a peeled melon singing the World Cup theme “We Are One” as Brazilian band Olodum banged drums below on this nation’s Valentine’s Day.

JLo, dressed in a low-cut sparkling green outfit, turned up for the performance despite earlier reports that she wouldn’t be able to attend.

The home fans cheered alongside small pockets of spirited Croatians in their checkered red and white tops.

The field was covered in multi-colored rays for the opening ceremony, which cost 18 million Brazilian reais, or about $8 million. A stadium worker died March 29 while installing temporary seats for the opener after construction already had been behind schedule.