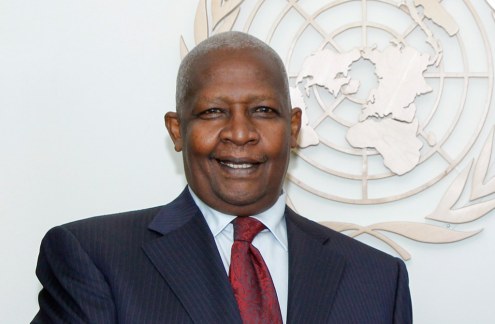 Wednesday’s election of Foreign Affairs Minister Sam Kutesa as the 69th president of the United Nations General Assembly has drawn a flurry of reactions from Ugandans and the international community.

Mawogola MP Kutesa, 65, was elected despite a sustained protest movement led by activists who slighted Uganda’s human rights record. But his election has mostly drawn praise. UN Secretary General Ban Ki-Moon said: “I congratulate His Excellency Mr Sam Kutesa on his election as President of the 69th session of the General Assembly.

Mr Kutesa brings wide-ranging experience to the job – lawyer, parliamentarian, finance minister and foreign minister. I wish him every success as he takes up his important responsibilities.”

He added: “The position of President of the General Assembly demands a variety of skills. I saw this for myself when I served as Chef de Cabinet to the President of the Assembly’s 56th session. One must be able to build bridges among all Member States, not just the most powerful.”

He said the president needed patience, since negotiations and consultations can take time. At times, one serves as a quiet guide, a messenger, a seeker of consensus. At all times, he said, “a General Assembly President is guided above all by the values, principles and obligations of the United Nations Charter… These many roles will be especially important during the upcoming session

of the Assembly, when many critical streams of work will converge and reach moments of truth.”

In separate interviews with The Observer yesterday, local leaders offered mostly support for Kutesa, although there was no shortage of critics. Nyabushozi MP Col Fred Mwesigye (NRM) described Kutesa’s election as recognition of Uganda’s contribution to several initiatives to pacify Africa.

“Uganda has contributed greatly towards regional integration, regional pacification and Africa in general. So this is a great honour for Uganda and we should all be proud of this achievement for our country and grateful that African countries surrendered this for Kutesa.”

Mike Ssebalu, a member of the East African Legislative Assembly, said: “The election of Kutesa, who is a member of cabinet and who belongs to the NRM and a Ugandan, is a great thing for this country and it is a vote of confidence in President Museveni and his government… ”

Capt Suzan Lakot, a UPDF representative in Parliament said: “As a Ugandan, I feel very proud because the International community has seen that brains from Uganda are good… ”

“It is not only Kutesa who has been picked from Uganda to take on international responsibilities, but we also have others like Betty Bigombe, who is a former minister of Water and Environment who has also been taken to work with the World Bank. So, it’s an indication that Uganda has brains which can serve the whole World” she added.

Terego MP Kassiano Wadri (FDC) said: “I would like to congratulate him but that does not mean that he is absolved of the inequities that were raised by the civil society. He should therefore work tirelessly on his image and the country that he represents because Uganda has had a very dark image especially when it comes to lack of respect for human rights, rule of law and good governance.”

West Budama North MP Jacob Oboth Oboth said: “The appointment of Kutesa is the best thing that could ever happen to this country regardless of other issues of whether Kutesa has problems with us in Uganda. I think he is going there as a nationalist, a patriotic Ugandan and I hope he will represent the interests of Uganda and I think we shall benefit from his presidency.”

“Let him keep the chair safe, because we do not want to hear of any corruption scandal… ”

Rukungiri Municipality’s Roland Mugume Kaginda appealed to Kutesa to represent the “views of Uganda and Africa rather than personal views at the UN.”

But Busongora North MP William Nzoghu (FDC) had no kind word for Kutesa: “I don’t need to congratulate him, but to condemn him. I have seen that these international bodies like the UN have become impotent because they do not do what they propagate. You tell states to become democratic, respect human rights, be accountable in terms of governance and then you elect Kutesa as president of the UN Assembly?”