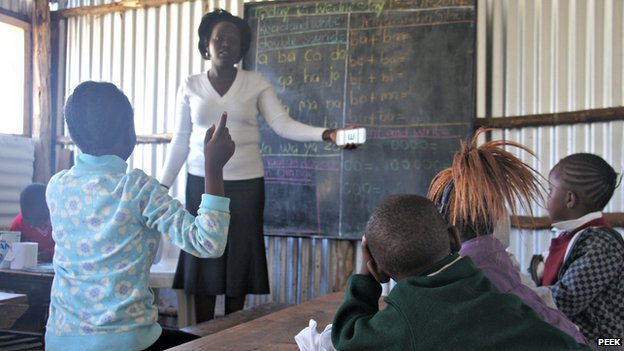 A ‘pocket optician’ made from a modified smartphone is to be used by teachers in Kenya as part of trial to catch pupils’ eye problems.

Access to eye care is a major issue in the developing world.

The same kit used on older people had promising results and led to more than 1,000 people receiving treatment.

The team behind the project, at the London School of Hygiene and Tropical Medicine, said treating children could stop them falling behind in school.

The World Health Organization says 285 million people are blind or visually impaired, but four out of every five cases can be prevented or cured.

Many children under-perform at school due to undiagnosed vision problems, which if corrected gives them a greater opportunity to realise their potential”

The main problem in children is poor eyesight, which means they require glasses.

But in large parts of the world there is a massive shortage of people able to perform eye tests, especially away from major towns and cities.

Eight teachers in one of the most deprived areas of Kenya, Kitale, will be trained to use the Portable Eye Examination Kit (Peek).

The smartphone app uses a shrinking letter which appears on screen as a basic vision test and it uses the camera’s flashlight to illuminate the back of the eye, the retina, to check for disease.

A patient’s records are stored on the phone and the results can be emailed to doctors.

The trial will begin in 10 schools, before expanding across neighbouring areas.

Dr Andrew Bastawrous, part of the group which designed Peek at the London School of Hygiene and Tropical Medicine, told the BBC: “Many children under-perform at school due to undiagnosed vision problems, which if corrected gives them a greater opportunity to realise their potential.

“Currently, clinicians, of which there are very few, go to schools to screen children. This takes them away from the hospital where they are needed most and puts the hospital under increased pressure.”

Children with eye problems will be referred to the Kitale Eye Unit for further evaluation and treatment.

Dr Hillary Rono, an ophthalmologist at Kitale District Hospital, said he was “extremely excited” by the project.

He commented: “Ever since the Peek team introduced their impressive adapted smartphone, we saw that it could really make a difference to the problem of screening in schools, and help increase the detection rates of children with poor vision, hopefully helping them realise their educational potential.”

The trial using Peek in adults is still taking place, but early results suggest it is effective at picking up vision problems.

The trial is funded by the International Agency for the Prevention (IABP) of Blindness and Standard Chartered.

Peter Ackland, the chief executive of the IAPB, said “Teachers are the gateway to testing children in many low-income countries simply because there are not enough human resources to have a more efficient way of screening.

“In people’s younger days, regular checks mean that problems with their vision can be treated as early as possible. However, in the current system, many children slip through the net and go through life with an eye condition that’s entirely avoidable.”

Richard Meddings, the chairman of Seeing is Believing at Standard Chartered, said “Developing effective methods for screening children at school is a key challenge to eliminating avoidable blindness for good.

“If this pilot test increases detection rates, it could be the difference between children spending their days seeing clearly, having blurred vision, or even going blind.”