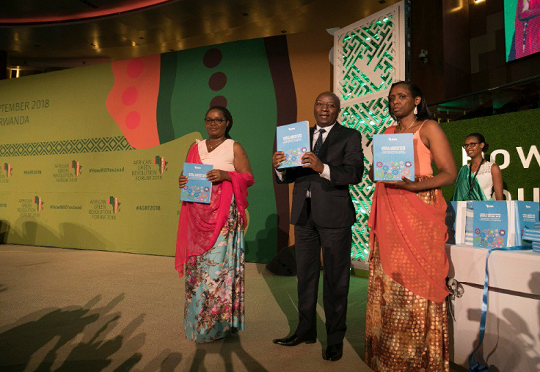 Majority of African countries are struggling to follow the lead of Asian countries in using agriculture to spark widespread economic growth because they have yet to marshal strong political support for agriculture—and then pair it with compelling visions, strategies and related implementation capacity for transforming their poorly performing farms, according to a major new study released by the Alliance for Green Revolution in Africa (AGRA).

“Our experience and lessons have shown that impact can be achieved faster by supporting countries to deliver on their own transformation; driving scale through a well-planned and coordinated approach to resources in the public domain to build systems and institutions,” said AGRA President Dr. Agnes Kalibata, commenting on the 2018 African Agriculture Status Report (AASR).

“Governments are definitely central to driving an inclusive agriculture transformation agenda. This body of work recognizes their role and aims to highlight the value of strengthening country planning, coordination and implementation capacity while supporting the development of an effective private sector and enabling regulatory environment.”

The report, “Catalyzing State Capacity to Drive Agricultural Transformation,” is the most comprehensive assessment to date of the role of state capacity and political will in achieving that “transformation,” a catch-all term for work required to boost production and incomes on the millions of small, family farms that grow most of Africa’s food—but where output often lags far below global averages.

The assessment was released on the opening day of this week’s African Green Revolution Forum (AGRF) in Kigali, a meeting that is attracting influential leaders from across the continent and around the world who are eager to see farming and food production take center stage in African economic development efforts.

The event’s theme—Lead, Measure, Grow—is spotlighting the importance of political leadership and accountability in delivering on the economic promise of agriculture.

The 2018 AASR notes that if one looks at countries like China or South Korea or, closer to home, at Ethiopia, Rwanda or Morocco, it’s clear that intensifying commercial production on small, family farms packs a powerful economic punch.

In Ethiopia, 25 years of steady growth in the farm sector has cut rural poverty rates in half and in Rwanda, over the same period, poverty has reduced by 25 percent.

The AASR finds that a consistent feature in each of these success stories is rock solid political support—led by heads of state, senior government ministers, private sector leaders and farmer organizations—for the “institutions, investments and policies” that can unleash the economic potential of smallholder agriculture and local agribusinesses.

Equally important: the report finds political capital is typically invested in a detailed plan of action that is carried out by a strong cadre of skilled professionals. And not just from the agriculture sector.

The report notes that successful agriculture transformation is a national agenda that involves significant contributions from other sectors, including finance, transportation, environment, energy and water. Together, they implement policies that create fertile ground for cultivating a new crop of local agriculture businesses.

But the AASR assessment reveals that this vital constellation of political energy, targeted policy reforms, government capacity and an enabling environment for agribusiness is precisely what is missing from the agriculture sector of many African countries.

It examined data from other independent research—such as those that compare government taxation of farm inputs to support the sector or that monitor public spending on agriculture including research and extension services—and noted that stronger policies and regulatory reforms are central in attracting private sector investments.

They all pointed to the same conclusion: that the government and state is key to leading and driving agriculture transformation. Otherwise, the report notes, the pace of development will never grow economies the same way it did in Asia.

“Existing data suggest that the political will to support agriculture transformation is likely lower in Africa than in other regions of the developing world,” the report states, adding that it “has not substantially increased during the past decade.”

At the bottom of this press release is a list of seven key recommendations to African governments that could help unleash the potential of African farmers and agribusinesses.

The report finds key exceptions that can help blaze a path for other African countries to follow. In addition to Ethiopia, Rwanda is cited for marshalling political support for agriculture and then integrating detailed action plans within its broader economic development strategies.

Progress in the sector is credited with lifting over one million Rwandans out of extreme poverty in a relatively short period.

Economic output in Ghana’s agriculture sector—driven in part by the government’s new “Planting for Food and Jobs” program—grew 8.4 percent in 2017 (after posting only 3 percent growth in 2016).

Similarly, AGRA experts point to countries such as Kenya, Burkina Faso, Mali, and Zambia as places where political momentum and government capabilities are growing.

Others also see reason for optimism in the increasing willingness of African governments to openly discuss where they are advancing in agriculture and where they are struggling. For example, 47 countries have signed on to the African Union’s Comprehensive Africa Agriculture Development Program (CAADP).

And they recently submitted detailed reports outlining their progress to date in achieving a range of commitments made through the AU’s Maputo and Malabo accords.

The report, dubbed the Biennial Review of the Malabo Declaration, re-enforced the link between government action on agriculture and reductions in poverty, with Rwanda posting the highest “agriculture transformation” score.

Another bright point in the report is the growing number of smallholder farmers in sub-Saharan Africa who have moved beyond subsistence farming to become commercial growers.

The report finds that 85 percent of Africa’s food is currently produced by smallholder farming households that generate a big enough surplus to sell 30 percent or more of their harvests for income.

“That means governments that are ready to step up their commitment to agriculture transformation likely have a core group of smallholder farmers who have the means and motivation to adopt new crop varieties and better farming practices,” said Boaz Keizire, AGRA’s Head of Policy and Advocacy. “And when their wealth increases, so does the wealth of their neighbors as these farmers tend to spend most of what they earn in their local communities.”

The report notes that it is “the increased spending of small commercial farmers” in rural communities that accounts for the powerful economic domino effect numerous studies have linked to agriculture growth in low-income countries.

The World Bank concludes that growth in the agriculture sector is at least twice as effective at reducing poverty as growth in any other sector.

“We hope people will be coming to this year’s AGRF ready to build the coalitions that can take advantage of the unique power of agriculture as the surest path to growing economies and jobs,” said Dr. Kalibata.