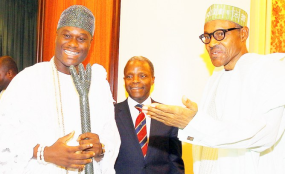 In a statement by the Director of Media, Ooni’s Palace, Moses Olafare, he noted that “This appointment would develop further and enable the monarch to build more bridges of friendship most especially across the Niger”.

He noted that Ogunwusi was ready to bring to bear his influence and connections to promote unity and harmonious working relationships in the university.

He further admonished Nigerians to promote issues that could foster unity to ensure speedy development rather than playing up their differences.

“It is incontrovertible today that Ooni Ogunwusi is a bridge builder and being the youngest chancellor appointed for the only university bearing ‘Nigeria’ is worth the celebration. His appointment as chancellor, University Of Nigeria, Nsukka is considered as a positive sign that can further enhance peaceful coexistence of our dear nation”.

Mr. Olafare disclosed that the appointment letter which was signed by the Minister of Education, Adamu Adamu, on behalf of the president, stated that the Ooni was chosen based on his wealth of experience and his capacity to manage men and resources.

He said the monarch would officially assume office on the 20th of February, 2016.