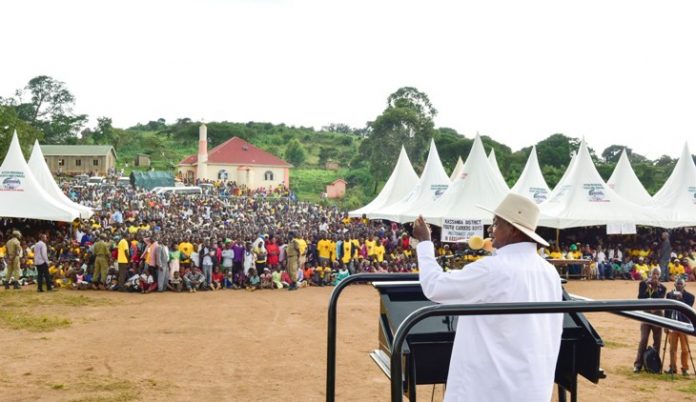 Uganda’s President Yoweri Museveni has commended the youth of Kassanda District in Uganda’s Central Region for participating in a 4-day youth camp.

The president made the remarks at Kikandwa UMEA playground in Kassanda District during the closing of the camp that he facilitated.

The Youth Action for Social, Political and Economic Development group ran the camp whose major objectives included ideology and appreciating our country Uganda.

The camp that had 2,654 youths mobilized them to get involved in Government Programmes including imparting leadership skills to them.

“While I was a youth I mobilized the people into poverty eradication. The youth should utilize their youthful and energetic times of their lives in ensuring their bright future. The main issues that need to be addressed are peace, development and wealth creation,” the President said.

The president observed that when peace is available, the rest will follow systematically.

Later, the president urged the youth to work for the promotion of security but cautioned them against listening to elements that are bent on causing insecurity.

He reminded them that NRM members went to the bush to restore security in the country.

The president also informed the gathering that included residents of Kassanda and the neighboring districts that development concerns everybody.

He, informed them that Kiganda town, Kiboga and other areas nearby had no electricity but noted that NRM Government has worked with a target of ensuring that all the Sub-Counties are connected to the national electricity grid.

The president assured them that permanent roads would be provided saying that NRM operates by setting up priorities.

The head of state called on the youth to be disciplined in their expenditure so that they work to save and invest. Noting that for long, the people of Uganda have been engaged in subsistence agriculture adding that now is the time to appreciate commercial farming.

He gave assurances that Government is committed to facilitating the youth in establishing feed mills and leather tanning industries in order to promote value addition and creation of employment.

He also assured them that the Government would train them in leather tanning and will provide them with skills in shoemaking adding that it is vital for us to make our own shoes and other finished products.

He informed them that they can generate income through such services like boda boda operation, saloons, shops and restaurants.

The head of state said that the youth also have opportunities in the ICT sector as well as in public service.

He challenged each youth to identify the sector that can be best utilized in generating incomes.

The President was pleased to note that the youth have woken up but cautioned them over demonstrations and the vice of riots saying that such behavior is against their interests.

While responding to complaints from the LC5 Chairman, Mr. Ziad Kalema, the President said that mailo landowners have got no right to evict bibanja owners. He added that NRM is keen in having a win-win situation between mailo and bibanja owners.

He said that under the arrangement, bibanja owners are to get land while the landowners would be compensated through the Government Land Fund.

He revealed that this measure could not be implemented due to limited resources at the moment. He said that the Movement Government would fulfill it as soon as funds are available.

President Museveni said that though minerals and water bodies belong to all Ugandans, people who are involved in the mining sector should do so in a legal manner by following the licencing system.

He commended the people who have planted forests in the area but asked them to stop growing trees in wetlands.

The President commended the people of Kassanda for their good performance in the establishment of SACCOs.

He made a donation of Shs 20 million to each of the 13 SACCOs involved in a wide range of services.

The Chairperson of Youth Action for Social, Political and Economic Development, Rita Namuwenge, saluted President Museveni for his continued sensitization of the youth in the fight against the HIV/ AIDS scourge.

She gave testimony about the success scored by her team in the growing of watermelons in Bulambuli District in the Eastern Region. She revealed that they have managed to generate Shs.10 million from an acre of watermelons.

The Chairman of Kassanda District Youth, Hakim Kintu, saluted President Museveni for fully facilitating the youth camp. He said that they have succeeded in sensitizing the youth.

The LC5 Chairman, Hajji Ziad Kalema, thanked the President for granting Kassanda a District status and also commended him for intervention in gold mining in the area to ensure the activity benefits the residents more.

He saluted the President for appointing the Land Commission probing team under Justice Bamugemereire and also lauded him for continuing to protect bibanja holders.