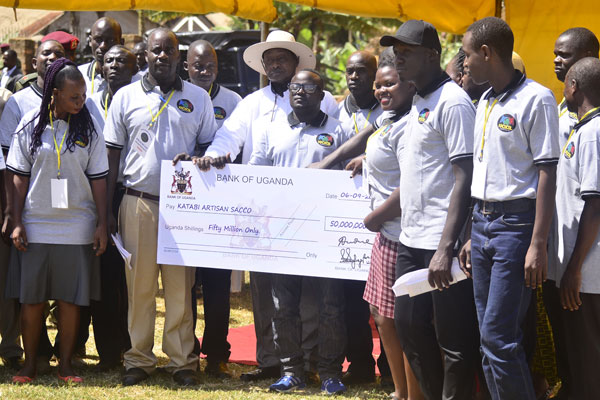 President Museveni on Thursday and Friday commissioned more than 10 projects he funded through formation of Savings and Credit Cooperative Societies (Saccos).

The commissioned facilities, in Wakiso and Kampala districts are part of his effort to fight poverty and offer skills to the youth who form the bulk of Uganda’s population.

The President, who was accompanied by Security minister, Gen Elly Tumwine and State minister for Primary Education Rosemary Seninde, the minister for Kampala, Ms Beti Kamya, Youth minister Nakiwala Kiyingi and Ms Anita Among, the Kumi District Woman MP, urged the youth to get relevant skills to create employment opportunities.

“I urge the youth to acquire skills that will create jobs and stop Ugandans from importing things that can easily be made in the country. Also, support leaders who will ensure your problems are attended to, not those pre-occupied with opposing government programmes,” President Museveni said.

The facilities are equipped with machinery for carpentry and joinery, wielding and metal fabrication.

The President said with such facilities, the youth will acquire skills to add value to their products.

He said Ugandans import so much from foreign countries and by skilling the youth to produce the same products from within the country, dependence on foreign imports will end.

“Ugandans spend more than Shs18b, annually importing all sorts of things and later on cry for jobs yet they are giving away jobs to the people in the countries they are importing from. We even import things like chairs, yet we have the timber here. “When you buy chairs from China, you give money and jobs to the Chinese. We want to stop importing and make all those things from here,” the President said.

Ms Lucy Nakyobe, the State House comptroller, said each unit in every carpentry was procured at a cost of Shs193m, while the metal fabrication and welding equipment were procured at Shs490m. She said the programme will continue until the entire country is covered.

“We started with the ones in Kampala and Wakiso. We moved to Entebbe Road, Bombo Road, Masaka Road and Jinja Road. We are commissioning these, but we shall later move to other districts,” Ms Nakyobe said.

Museveni donated a FUSO truck to the Saccos to help them transport their products to the market.
The President presented cheques of Shs50m to Kibuye Drivers’ and Conductors’ Sacco, with Lubiri Lorry Drivers’ and Co-Drivers’ Sacco, Busega United Timber and Sellers Sacco, Katabi Artisan Sacco and Busega Welders’ Sacco while Najja2 Sacco got Shs 30m.