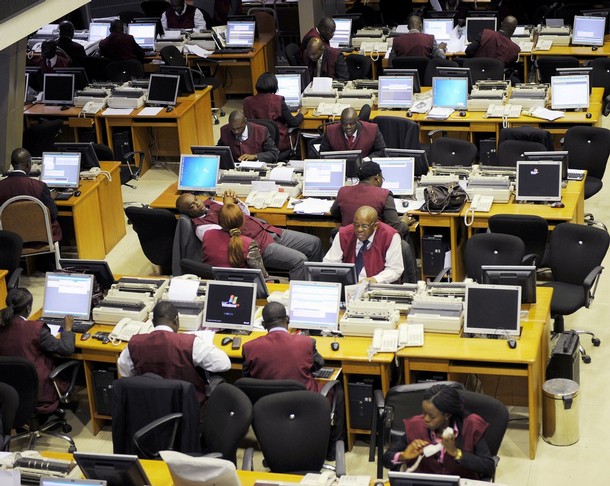 Shares and bond prices fell Thursday; as stock index recorded a 2.24 percent decline to end the day in a 7-week low due to huge foreign investors sell off in the Nigeria Stock Exchange.

The country’s central bank has been forced to intervene to strengthen the currency as the naira hit an all-time intraday low.

“We have the capacity to defend the currency and we will defend it,” central bank deputy governor Sarah Alade was quoted by Reuters as saying.

Having already lost over 3 percent of its value this year, the naira fell to a record low of 167 against the dollar, but ended up at 163.05 after intervention by the Central Bank of Nigeria (CBN).

Thoughts around whether other the CBN will stop bolstering the currency if the current trend continues and would just devalue the naira are believed to be driving the market.

While the CBN governor Sanusi Lamido Sanusi had often reiterated his resolve to keep strengthening the naira, foreign investors are apprehensive of political climate in Nigeria, and what might happen after the CBN governor bows out in June this year.

Pressured like other emerging markets currencies by U.S. Federal Reserve ‘tapering’ policy, analysts expect the naira to lose more value in the coming weeks, with a wasteful government spending expected ahead of the country’s 2015 elections.

in a recent research, Investment firm RenCap projects that the naira might be devalued in 2015, however noting that “forex reserves would have to drop significantly for the new CBN governor to devalue the naira”.

Worries about the currency remain, and that may mean more foreign investor sell-offs in the coming days.

The CBN is however expected to continue buoying the naira with its forex reserves, just as it continues tightening policies to ensure the currency stays afloat.