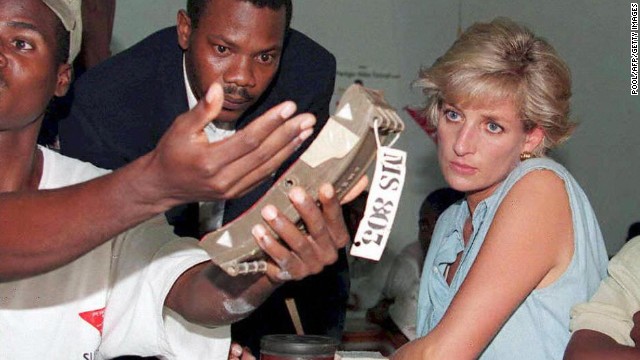 Prince Harry has arrived in the southern African nation of Angola to visit mine clearance projects run by the same charity backed by his mother, Diana, Princess of Wales.

Diana visited Angola in support of the Halo Trust in 1997, not long before her death in a car crash in Paris.

Images of her wearing protective gear as she witnessed mine-clearing efforts in the towns of Huambo and Kuito helped draw the world’s attention to the suffering caused by landmines.

Her son’s private visit to Angola comes three years after he traveled to Mozambique to see Halo’s work there.

“Prince Harry is visiting a number of demining teams across the region and will be touring minefields and meeting with beneficiaries of Halo’s work,” said the charity’s chief executive, Guy Willoughby.

The trip will include a stop in the southern Angolan town of Cuito Cuanavale — which according to Halo is believed to be the most heavily mined town in Africa.

The remote town, population 43,000, was heavily mined and attacked during Angola’s long-running civil war — and work to make it safe for its residents continues today.

Halo has removed and destroyed 21,300 anti-personnel and anti-tank mines from the area so far, with its efforts steadily moving out from the town center to areas farther afield.

Halo, which began its work in the country in 1994, employs more than 650 Angolan staff.

Its mine clearance work is increasingly focused on more rural areas, away from provincial centers, Halo says. As such areas are cleared, they can instead be used for growing crops, grazing animals or building houses.

According to the charity, on average each hectare of land cleared benefits 11 families directly and 59 families indirectly.

Halo is also involved in the country’s national disarmament program.

Angola’s protracted civil war, which broke out after it gained independence from Portugal in 1975 and finally ended in 2002, killed up to 1.5 million people, according to the CIA World Factbook. About 4 million people were internally displaced, more than half of them children, the United Nations said.