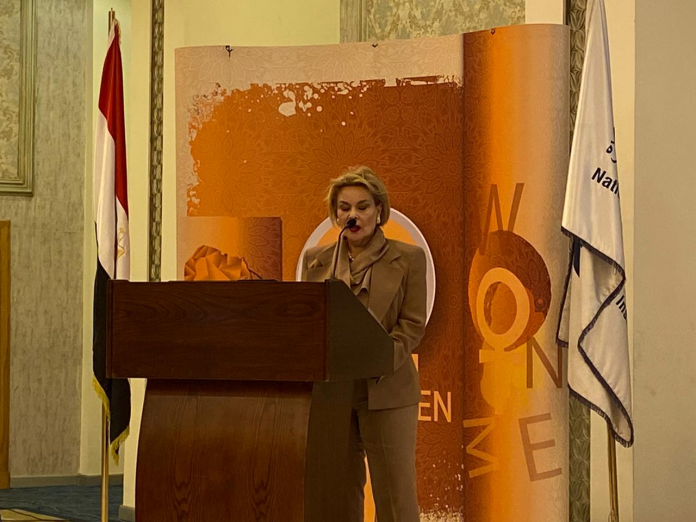 Ms. Mansour reiterated her commitment, during the African Women’s Leadership Programme (AWLP), an initiative of the African Union Commission Chairmanship Initiative and delivered by the National Management Institute of Egypt.   The event which held from the 10-22 January 2020, at the Triumph Hotel Fifth Settlement, New Cairo, Egypt, had in attendance over 100 women from 45 countries across Africa.  The Conference was a 12-Day and a culmination of 80 hours of Executive Training; 3 days site visit; and a closing dinner.

Highlighting the importance of the training, some of the participants noted that, the gathering has been a very impactful one, that would help them in the actualization of their goals in the workplace. They also added that, every woman should be exposed to a training like this to help equip them towards pursuing the all important Gender equality mandate.

In her speech at the event, Ms. Mansour recounted her discussion with her young daughter, Maryam, who at an early age wanted poverty eradicated from the continent. In her response, Ms. Mansour averred that, “ My duty is first to Egypt and then to the rest of Africa and I am assuring you that I will help in my little wat to fight poverty, starting from Egypt and then to other parts of the continent.”  Continuing, she maintained that, “at first, I thought that it was impossible, but, in the past 10 years, we have been committed to this cause and we are now receiving recognition from the globally renowned institutions like the African Leadership Magazine UK.”

She was also honoured with an award by the National Management Institute of Egypt for her sterling leadership qualities and contribution to the development of the profession in the county.

Ms. Mansour has from inception remained a vocal voice and maintained a sturdy commitment to the promotion of the United Nation’s Sustainable Development Goal on Poverty Eradication, Gender Equality, Decent Work and Economic Growth. Over 20 years ago, she made a life changing decision to move from a renowned interior designer to leading voice for gender equality, climate change and social Entrepreneurship, and said, “I want to not only make the lives of the rich beautiful, but to enrich the lives of those most segregated”.

Today, the renowned business leader, has continued to impact the lives of women across Egypt and beyond and remains an inspiration for women across the continent.

A renowned businesswoman and frontline environmentalist, Ms. Rawya Mansour recently emerged winner of the African Leadership Female Leader of the Year, 2019, in a keenly contested poll, across 7 different categories, which attracted over 74,500 entries on the website; 45,000 entries across social media platforms, and 15,000 submissions via emails. Ms. Mansour, who is the founder of the RAMSCO Group emerged winner in the polls for the African Leadership Magazine Persons of the Year Awards 2019, with over 60% of the total votes/submissions for her category. Ms. Mansour will be honoured and presented with the awards in February at the Sandton Convention Center, alongside African Leaders like: Dr. Akinwumi Adesina, President, African Development Bank; H.E. Abdel Fattah el-Sisi, President of Egypt; Dr. Yusuf Karodia, Founder, Regent Business School and MANCOSA; Ashish Thakkar, CEO, Mara Phone; among others.

The event was held with strong support from the Egyptian government, underscored the government’s commitment to the promotion of the United Nation’s Sustainable Development Goal 5, which provides for the elimination of all forms of discrimination against women and girls by the year 2030.