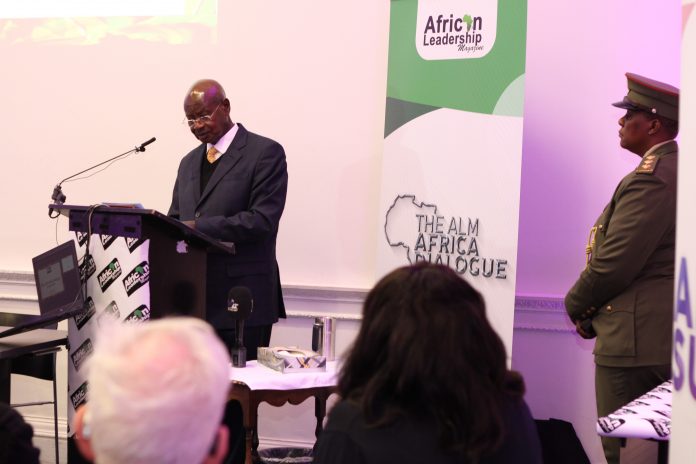 The African Leadership Magazine has concluded its Africa Dialogue which held on the
21 January 2020 at the Royal Geographical Society, London United Kingdom, on the
margins of the UK Africa Investment Summit, with a renewed call for Africa’s private
the sector to sustain the push to build partnerships, upskill its personnel, and create the
much-needed jobs for Africa’s young people swelling the already outsized labour market
on the continent.

The dialogue began with President Yoweri Museveni, who delivered the keynote
address on the topic, Harnessing Africa’s Potential – The Uganda Example, calling on
African stakeholders to get its diagnosis of the African challenge correctly before
prescribing a solution. He posited that Africa’s problems were mainly internal
weaknesses not brought about solely by external influences, but an inability of Africa to
the transition from muscle power to machine and information power along with the rest of
the world; and as such believes that only an African solution that is at par with progress
in other parts of the world can effectively move the continent forward. He boasted that
in Uganda, the government under his watch had ensured the defence of the country
against terrorism, noting that Uganda insisted it can resolve its challenges without UN
support, especially in ensuring terrorism could not thrive in the country. Other speakers
at the Dialogue included Rt. Hon Jim Murphy, a former UK Member of Parliament for
over 18 years, and Foreign Office and Cabinet Minister, now Managing Director of
Arden Strategies; Ms Nirmala Rewa of the Mauritius Economic Development Board; Sir
Richard Heygate, a former longtime McKinsey Partner in the London office and Mr
Senyo Hosi, CEO of the Ghana Chamber of Bulk Oil Distributors.

Uganda ratified the African Continental Free Trade Agreement (AfCFTA) mid-year 2019,
an agreement that exceeds that of a traditional free trade area as it brings together all
55 African Union member states, covering a market of more than 1.2 billion people and
a combined gross domestic product (GDP) of more than US$3.4 trillion, with a
commitment to removing tariffs on 90 per cent of goods, progressively liberalising trade
in services, and addressing a host of other non-tariff barriers. In 2019, according to the
World Bank, the Uganda ease of doing business increased to 119 out of 190, from 127
in 2018, signalling friendlier business environment for private sector development.

President Museveni was presented with the African Peace Leadership Award, by Ken
Giami, publisher of the African Leadership magazine, in recognition of the president’s
contributions to peace and security in his country and the East African region; and for
his involvement in revolutionary emancipation over the last 60 years. Presenting the
honours, Dr Giami noted that while the award was not an endorsement of the
President’s politics, noting that the magazine did not agree with all of the president’s
activities, it was, however, a sincere appreciation of the efforts of the president at enthroning the much-desired peace that would catalyse greater economic activity and
progress in the region. Dr Giami, also maintained that there were areas where the
the president must urgently improve – namely strengthening the institutions of governance
in the country and creating an enabling environment for Uganda’s young people to also
run for political office in free and fair elections.