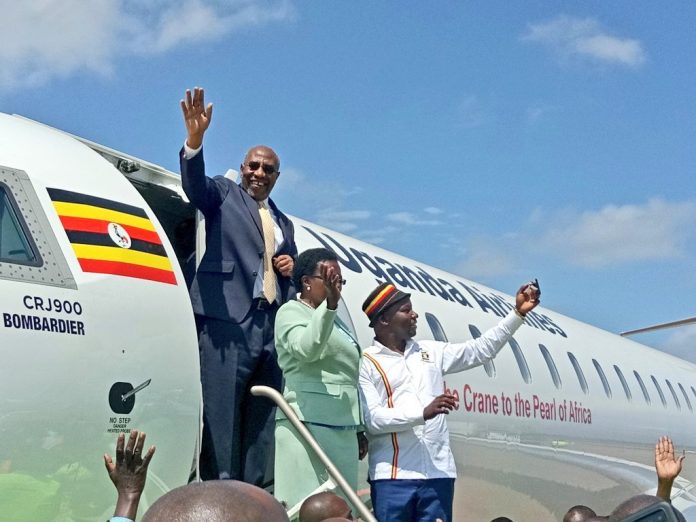 Uganda on Tuesday relaunched its national carrier, Uganda Airlines, hoping to take a slice of the East African aviation business that is dominated by Ethiopian Airlines.

The country is banking on its emerging oil industry and the traditional tourism sector to generate international traffic to sustain the airline.

“The number of passengers travelling into Entebbe Airport, in and out of Entebbe Airport is approaching 2 million. 70 percent of those are Ugandans. All those currently travel on foreign airlines, so we want part of that cake and that is quite a substantial number of people,” said Ugandan Airlines CEO Ephraim Bagenda after the airline’s first flight from Entebbe to Nairobi. The airline will initially fly to seven regional destinations in Kenya, Tanzania, Somalia, South Sudan, and Burundi, the CEO said.

In November, the airline would launch flights to destinations in south and central Africa, he said. But Uganda Airlines will face stiff competition not only from Ethiopian Airlines, but also from Rwanda and Tanzania which have also poured cash into their flag carriers in the past few years, though with far less success than Ethiopia.

Uganda Airlines, founded by the country’s former dictator Idi Amin in 1976, was liquidated in 2001 during a push to privatize state firms.

“This is a historic event for one reason, I am sure you all know we used to have Uganda Airlines flying but for twenty years or more Uganda Airlines stopped flying for various reasons. But our government saw it fit that we need to revive the national airline,” said Prime Minister, Ruhakana Rugunda.